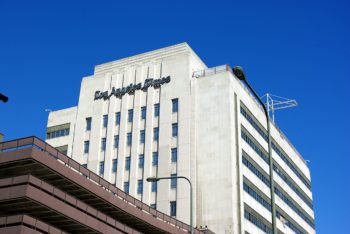 The Los Angeles Times cut ties with freelancer Steven Borowiec after he tweeted “I would rather see Donald Trump’s life end” in response to a tweet from Time magazine about Trump’s “life in photos.”

While Borowiec apologized on Twitter, writing, “I apologize for my Trump tweet. I meant it in jest,” the original tweet was unacceptable for the Times. Borowiec lives in South Korea.

“Times staff members are required to treat social media posts the same as articles they write for the newspaper and for latimes.com,” the Times‘ readers representative Dierdre Edgar wrote. “News coverage must be objective and neutral; personal opinions have no place in it. Freelancers are held to the same standard.”

The Times‘ spokesperson Hillary Manning sent iMediaEthics its statement on the matter and said Borowiec had freelancer for three years:

“Steven Borowiec, a freelance journalist in South Korea, posted a tweet about Donald Trump on his personal Twitter profile that violated our professional standards.

“The Los Angeles Times is committed to fair, evenhanded coverage of the presidential campaign, and expects all journalists representing the paper, including non-staff contributors such as Mr. Borowiec, to adhere to this standard in their articles and social media posts.

“We regard Mr. Borowiec’s comment as inexcusable, and we have ended our relationship with him.

Really hope the @latimes understands that one of its journalists said this about @realDonaldTrump … before deleting the Tweet pic.twitter.com/3g5ioV0oGO