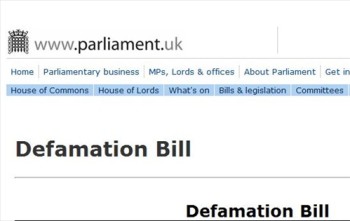 See above a screenshot from the proposed bill.

A new libel reform bill is coming to the UK, according to Britain’s Queen Elizabeth II.  The queen mentioned the forthcoming bill during a May 9 speech in front of Parliament, the New York Times reported.

Some of the reforms proposed:

UK Justice Secretary Ken Clarke, who “published the bill,” said that it “will rebalance the law” to continue to allow legitimate defamation cases but to prevent “such action unjustifiably hindering freedom of expression,” according to the Huffington Post UK.

Nature journal, which “backed the libel reform campaign,” noted in a May 11 blog that the bill will “provide a specific protection to statements in scientific or academic journals…conditional on the statements having been independently reviewed by a journal editor and one or more experts.”

Reactions to the Announcement and Bill

The UK Libel Reform Campaign responded to the announcement by saying that ” there is still work to be done and we will carry on campaigning to make sure that the detail in the final Bill will truly deliver reform,” according to the UK Independent.

Index on Censorship’s Kirsty Hughes said the group is “delighted that the Government has announced this reform, though we’ll be awaiting detail,” according to the Press Gazette.

The New York Times noted that “all three of the main political parties” in the UK have backed plans to reform the libel law.

We wrote in March 2011 when Ukrainian newspaper the Kyiv Post started letting UK readers visit its site. The newspaper blocked traffic to the UK after being sued in the UK, but ended its ban after the case was dismissed for lack of jurisdiction.

We wrote in December 2010 when the UK Supreme Court updated its libel law to change the “fair comment” defense to “honest comment.”