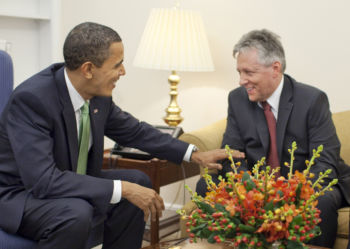 But Robinson is not stopping there. His lawyer, Paul Tweed, told iMediaEthics that he is currently “in process of taking action in relation to individuals who have tweeted the Metro article.” Tweed also confirmed to iMediaEthics by e-mail that Robinson received an undisclosed libel payout and the apology as a settlement of his legal claim against the paper.

The Metro reported in June that Robinson “was once even pictured wearing the red beret of loyalist terror group Ulster Resistance.” The editor of the Metro newspaper, Ted Young, told iMediaEthics Aug 30 that the error and apology were only in the online Metro and not in the print edition, which he said has a different staff.

Robinson resigned as Northern Ireland’s first minister and as leader of the Democratic Unionist leader in 2015.

The Metro is a free tabloid newspaper owned by Associated Newspapers, the same parent company as the Daily Mail.

On its homepage Aug. 23, the Metro posted a correction admitting error:

“On 9 June, we wrongly reported that Peter Robinson, the former leader of the Democratic Unionist Party had been an active member of a terror group, the Ulster Resistance.

“Mr Robinson has neither been a member of a terror group, nor supported terrorism. We apologise to Mr Robinson for our error and any embarrassment caused.”

Back in 2011, iMediaEthics wrote about Robinson’s wife, Iris Robinson, when she sought an injunction to prevent the media from reporting on her medical status. The injunction came two years after Robinson resigned from Parliament related to depression.

We clarified the text above to reflect that the error and apology were only in the online Metro not in the print edition.