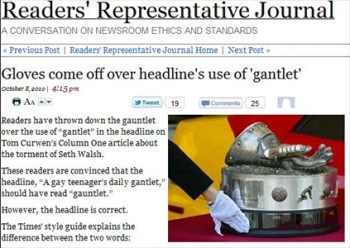 The Los Angeles Times’ readers’ representative blogged Oct. 8 that despite readers’ complaints, the Times was correct in its headline “A gay teenager’s daily gantlet.”

“We would hate to retire a perfectly fine word — one that in this case was just right for the occasion — but we may have to think twice about using ‘gantlet’ in the future, at least in headlines,” assistant managing Editor Henry Fuhrmann, is quoted as saying to Edgar about the gauntlet/gantlet issue.