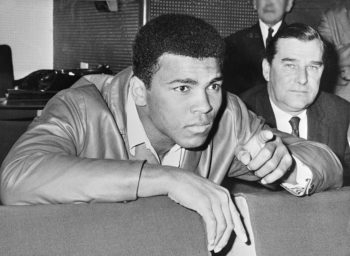 The Louisville Courier-Journal apologized for ignoring Muhammad Ali’s name-change back in the 1964 and instead predominantly using his birth name, Cassius Clay, until Dec. 1970 when the newspaper finally began referring to him only as Ali.

“It is time for the Courier-Journal to acknowledge the role it played by not accepting the name Muhammad Ali for several years after the 22-year-old Cassius Clay took on the moniker when he adopted the Muslim religion in 1964,” the newspaper wrote in a recent editorial. “During those years, in our news columns, the CJ almost always called the boxer Cassius Clay, certainly in headlines.”

Sometimes, the newspaper used Cassius Clay with Muhammad Ali in parentheses. “It really wasn’t until we started combing through the archives following his death that it struck us what was going on back then. Reporter Joe Gerth was the one who first brought it to my attention and then I did a lot of additional research/reading of stories from that era,” the Courier-Journal’s editor Neil Budde told iMediaEthics by e-mail.

The Courier-Journal editorial added, “We won’t even try to speculate what the motives of the editors in that era were. The CJ was certainly an early champion of civil rights and desegregation. Yet we took what in today’s light is an oddly hostile approach on the specific issue of Ali’s name, which did little to help race relations in a turbulent time.”

The paper’s editor Budde told iMediaEthics, “So far, the response I’ve seen has all been positive, though one letter writer said we should have done it years ago while Ali was alive and could have seen it.” He said the paper held off on publishing until after Ali’s funeral so news coverage would focus on “Ali and the celebration of his life.”

In its own article on the use of Cassius Clay, the New York Times reported, “It wasn’t until the early 1970s that The Times, for one, began to regularly call him Muhammad Ali.”  The Times noted it “was not alone in this policy” with the Washington Post calling Ali Clay as well.

The Times reported that its former sports reporter and columnist Robert Lipsyte explained the newspaper used Clay instead of Ali “until Ali changed his name in a court of law.” This, Lipsyte argued, was “embarrassing” given the double standard in referring to other celebrities, like John Wayne (born Marion Morrison), by their chosen names.

The Times quoted its associate editor for standards Philip B. Corbett saying that now the newspaper doesn’t typically “impose a name on someone” and instead uses “the name people use for themselves.” However, the Times is “reluctant to use unorthodox typography,” and Corbett gave the examples of Ke$ha and ?uestlove, which will be edited to have traditional letters.