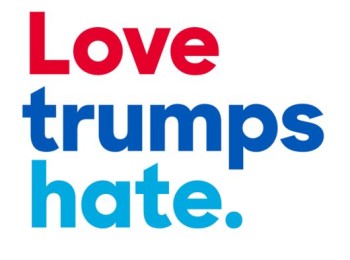 Your English teacher probably warned you that a misplaced punctuation mark could change the meaning of your sentence. The Globe and Mail was reminded of that lesson in a story about Hillary Clinton and Donald  Trump.

Clinton tweeted in response to Trump’s call to ban Muslims from entering the United States that “Love Trumps Hate,” with the message, “Tell Donald Trump: Hate is not an American value.”

But the Globe and Mail added an apostrophe which dramatically changed the message to suggest she was calling on supporters to “love [Donald] Trump’s hate.”

A correction on the Globe and Mail‘s story, according to The Huffington Post, was published on print and online. In print the correction reads:

“The original print version and an earlier digital version of this article incorrectly quoted a Hillary Clinton tweet as saying ‘Love Trump’s Hate.’ In fact, the tweet was ‘love trumps hate.’ This digital version has been corrected.”

Tell Donald Trump: Hate is not an American value. pic.twitter.com/qlhuKPKwn0