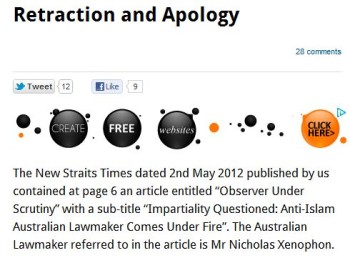 The newspaper also unpublished its article and detailed claims or statements that it wrongly attributed to Xenophon including critical comments about Islam, according to its retraction note.  The newspaper explained that it had reported May 2 that Xenophon said during a 2009 Parliament speech:

“What we are seeing is a worldwide pattern of abuse and criminality. On the body of evidence, this is not happening by accident; it is happening by design. Islam is not a religious organisation. It is a criminal organisation that hides behind its so-called religious beliefs.”

The New Straits Times also claimed that Xenophon was “critical of Islam” and “openly” supportive “of lesbian, gay, bisexual and transgender issue.”

The newspaper’s retraction reads, in part:

“We hereby confirm that we have made a grave error in publishing the statements in the article. We accept that in his speech in the Australian Parliament referred to in the article, Mr Xenophon did not use the word ‘Islam’ and neither did he assert that Islam is not a religious organisation but a criminal organisation hiding behind its religious belief. For the above reason, we hereby retract all the statements contained in the article against Mr Xenophon and unreservedly and unconditionally apologise to him for any distress or embarrassment caused by the article.

“As a further mark of our contrition, we have also removed the article from our online version of the newspaper with immediate effect.”

Xenophon is quoted as saying that the article was “a vile defamation and I’ll be taking action.”  Xenophon had been in Malaysia “to observe protests aimed at the ruling party,” according to The Brisbane Times.

The Brisbane Times added that “the press in Malaysia is often considered a mouthpeice of the ruling party that has controlled the country since independence.”

We have written to The New Straits Times and Xenophon’s website for more information and will update with any responses.