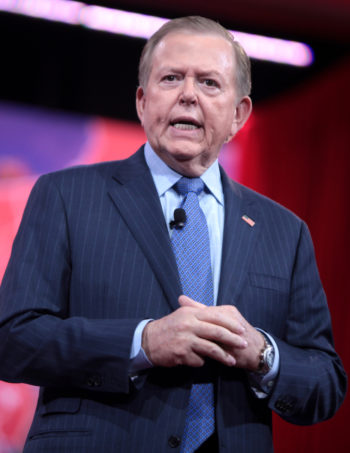 “The president’s victories are showing up in the polls according to a Georgetown University poll,” Dobbs said April 10. “The president’s overall approval is now 55% — let’s hear that, 55% — and approval rating for president’s handling of the economy, a robust 58%. Fifty-five percent is pretty robust too, don’t you think?” But, 52% of the poll respondents disapproved of Trump’s approval rating, and 43% approve.”

Dobbs made the error on Fox Business Network.

The NBC News report on the Georgetown Politics poll reads:

While President Trump’s overall unfavorable rating has remained steady at 55 percent since he announced his candidacy in 2015, 58 percent of voters approve of the job he has done on the economy.

“It’s been a quiet start to the day for President Trump, though he did send out a tweet this morning from the Lou Dobbs show last night on Fox Business. That tweet featured a poll that was not entirely accurate, which Fox Business would like to correct.

According to a poll from Georgetown University, 58% of respondents approved of the president’s handling of the economy. That portion of the graphic was right. However, the graphic also showed that 55% of the respondents approve of the president, that number is not correct. The 55% number was those who have an unfavorable impression of President Trump.”

Dobbs corrected the error as well April 11 saying on-air, according to Business Insider:

“I’d like to repair something I got wrong last night, incorrectly reporting that a Georgetown poll showed the president had an overall approval rating of 55% — the number in fact is 43%

“I’m the Director of @GUPolitics & this graphic is incorrect.The Battleground Poll shows 58% approval on the economy. But it shows only 43% overall approval, & 52% disapproval.
The 55% number is the President’s unfavorable rating. (Only 40% favorable.) ”