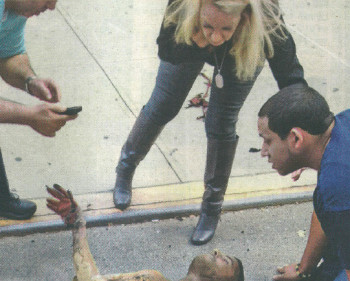 Detail image from the NYPost

A Brooklyn man died this past week after he was set on fire by an explosion. With flames rising from his body, the man ran out of a building and collapsed in the street, where his clothes burned off of his body.  After being taken to the hospital, the man, identified as Saram Mohammad, died.

In covering the horrific incident, The New York Post published an almost full-page graphic photo of the man, naked, in its Oct. 22 edition. The Post did show some reserve by blurring out the man’s genitalia, but really, why even bother at that point, iMediaEthics wondered. [If you want to see the print edition with this graphic photo, we uploaded a PDF. Warning: Graphic]

In the print edition, the Post’s photo doesn’t carry any photo credit, so readers don’t know where the photo came from. The photo was apparently just published in the print edition. The web version of the story is only accompanied with a photo of two people in hazmat suits outside the man’s building.

iMediaEthics has written to the Post to ask where the photo came from, why it was only published in print and not online, and why the Post decided to publish such a graphic image.

At least two New York news sites published video of the man on fire running through the street.

The NY Daily News boasted the “exclusive video” of the man on fire running down the street.

A screenshot from the New York Daily News’ video

“Exclusive video acquired by the Daily News shows Saram running from the store — his shirt and pants burning off of him — at 1:40 p.m.,” the NY Daily News reported.

We’ve asked Gothamist why it decided to publish the video and why it  took it down and will update with any additional information.

The Huffington Post also published a video, but warned readers about the nature of the video. The warning reads “WARNING: The following video may be unsuitable for some audiences.”

A Huffington Post spokesperson told iMediaEthics that editors decided to take it down after a technical glitch. “The video initially stopped functioning due to what we believe was an issue with the video provider. In any case, we have removed the video from our article in light of the man’s death,” the spokesperson told us.

News Outlets Got His Name Wrong

Beyond the graphic nature of the coverage of the man, iMediaEthics noticed that news outlets differed on the spelling and order of the man’s name. iMediaEthics made a quick call to the NYPD’s public information office Oct. 25 and confirmed the man’s name is Saram Mohammad.

NY1 got it right though.

Last year, iMediaEthics documented how the media bungled the name of Ki-Suck Han, the man who died in December 2012 after being pushed into the subway tracks and being hit by an oncoming train. A year after Han’s death, news outlets continued to misspell and botch his name.