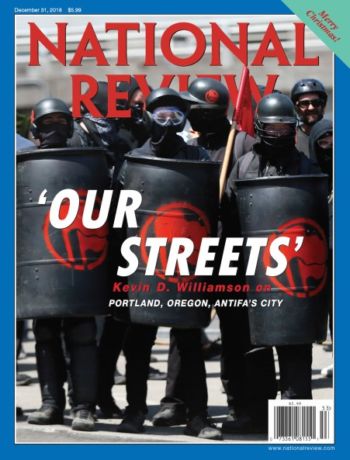 The most recent National Review cover.

National Review, a twice-monthly “magazine of conservative opinion,” claimed that a male college student broke Title IX regulations for being bigger than a female student he asked out on a date. But the National Review has now retracted that article because it failed to provide “relevant details,” such as the fact that the male student was accused of stalking the female student.

The original headline for the Dec. 27 article was “Being Bigger than the Person You’re Asking Out Deemed Title IX Violation.” Title IX bans sexual discrimination in federally-funded education.

iMediaEthics has written to National Review to ask how long the story was published before removal and how it could have gotten such a salient fact as the stalking accusation so wrong.

In an editor’s note, the National Review wrote:

Editor’s Note: This article and its headline originally stated that a male student at the University of Missouri was found in violation of Title IX because he asked a female student on a date and “was perceived as having power over her.” The article accurately quoted the deposition of the Title IX case, but it left out relevant details. In fact, the male student had made repeated, unwelcome advances toward the female student and was found in violation of Title IX for stalking her. He is suing the university and alleging that its Title IX office engaged in arbitrary enforcement and racial discrimination, but his lawsuit does not contest the fact pattern left out of this article. We are retracting the article and we regret the error. The article, including the the initial editor’s note, is below.

How Willing is the Public to Compromise on the Shutdown? Why 2 Polls Find Different Answers
Why Seattle public radio won't air White House coronavirus briefings live