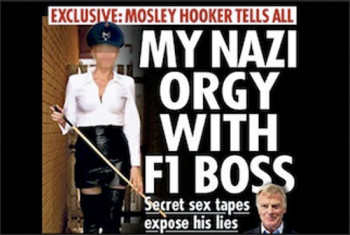 News of the World's cover story on Mosley in 2008.

Max Mosley is suing Google UK to get the company to take down pictures of him at a sex party.

In the UK, he sued News of the World and was awarded nearly 70,000 euros. A UK court ruled in 2008 that there was “no justification” for News of the World to publish the report about Mosley.  Mosley had argued the video simply showed “harmless, consensual and private, with no Nazi overtones” role-playing, according to the Huffington Post.

“The scale of the distress and indignity in this case is difficult to comprehend. It is probably unprecedented,” UK Justice Eady said.

Mosley also sued News of the World in France over the report and was awarded 7,000 euros in 2011.

His lawsuit argues that the photos being accessible on Google breaks the Data Protection Act and his privacy.

The lawsuit “seeks to compel Google to stop gathering and publishing images that the English High Court decided in 2008 were unlawful in the landmark privacy case Mosley v News Group Newspapers,” a press release from his lawyers states.

“As the gateway to the internet Google makes enormous profits and has great influence, so I have not taken this action lightly,” Mosley said in a statement published on his law firm’s website. “But Google should operate within the law rather than according to rules it makes itself. It cannot be allowed to ignore judgements in our courts.”

A Google spokesperson told The Guardian that Google has “taken down hundreds of URLs” at Mosley’s requests.

While in the EU, the issue of the “right to be forgotten” has been in the news lately — this case is not about that. The EU Court of Justice decided earlier this year that Google must remove personal information and links from search results when people complain they are “inadequate, irrelevant or no longer relevant, or excessive.”

“This is not a case about the ‘right to be forgotten’ or freedom of speech. Nor does it require Google to act as an arbiter of what is lawful and what is not,” Mosley’s lawyers said in their press release. “The High Court has already made that decision in respect of the images concerned. All that Google is being asked to do is to take practical measures to give effect to that decision of the court.”

iMediaEthics has written to Mosley’s lawyers at Payne Hicks Beach as well as to Google for comment.

According to The Guardian, Mosley “has already won similar claims against Google in the German and French courts,” which Google is appealing.