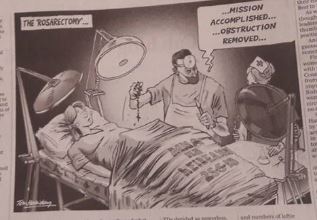 The Sunday Irish Independent was justified in publishing a cartoon depicting a surgeon removing rosary beads from a woman. The “rosarectomy” cartoon was published as part of its coverage of Ireland’s abortion referendum, the Irish Press Ombudsman ruled.

The cartoon was captioned “The ‘rosarectomy'” and the surgeon was depicted telling a nurse “mission accomplished … obstruction removed.”

iMediaEthics recently saw the August ruling, and given the numerous controversies over news media publication of cartoons, wanted to feature this case.

A reader, who wasn’t named by the press ombudsman in his report on the complaint, was upset that the cartoon was “deeply offensive” and “an unwarranted attack upon the religious beliefs and practices of Catholics.”  He also called the cartoon “insulting, inflammatory, insensitive and reeked of petty triumphalism” and called for a “public acknowledgement of the offence.”

The Independent, however, noted that it published many letters to the editor in response to the cartoon, along with an apology from the cartoonist “to any reader who had taken offence.”

The Independent‘s editor defended the cartoon as a “visual comment” on the debate, adding, according to the ombudsman, “The cartoon is clearly a reference to the well-known phrase ‘keep your rosaries off our ovaries’ – which has been used during every referendum linked to abortion.” He noted it was “a shorthand for the conflict between a faith-based view of the issue and a woman’s-rights view of the issue.”

The press ombudsman dismissed the complaint because cartoons have a wider berth for commentary.  “There is no doubt that the cartoon offended some people,” the ombudsman wrote. “However, there is a degree of licence available to cartoons to engage in ridicule, satire and irony which is not available to other forms of journalism.  For this reason, any offence caused by the cartoon did not breach Principle 8 of the Code of Practice.”

iMediaEthics has written to the Independent‘s editor to ask its response to the ruling.