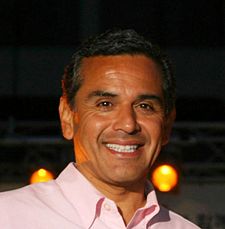 After having one affair with one female journalist, Mayor Antonio Villaraigosa goes ahead and has an affair with another despite the troubling conflict of interest.(Credit:Wikimedia Commons)

What is astonishing from an ethics perspective: This is the second time in two years that a news reporter has been romantically linked to the Mayor. Toy writes: “The [Lu Parker] story is new, but it sounds familiar for a reason. In 2007, Telemundo telecaster Mirthala Salinas dated the mayor for months before she had the chance to read the story, on the air, saying that he and his wife had publicly separated.”

Herein lies the problem. Romantic affairs between journalists and their, ahem, sources are not publicly revealed until couples are caught or alliances change (eg. the dumping of a partner). This time delay, between when the affair begins and the public confession, leaves the painful and lingering questions about what punches were pulled due to the conflict of interest.

Toy writes: “By November of that year, Salinas not only lost the guy when she broke up with Villaraigosa – she also lost her career in television. Instead of returning to work in her newly assigned post in Riverside County, Salinas quit reporting altogether. She came back to morning radio show ‘Hoy por Hoy’ on W Radio XETRA 690 AM in 2008. With this hazardous history in mind, Parker still started dating the mayor in March. That’s just astounding, especially since she has even more to lose than the last reporter.”

As a South Pasadena resident and writer for the UC Berkeley student paper, Toy seems particularly angry at the breach of trust committed by the mayor and two female reporters.

Toy states: “Journalists have the responsibility to remain unbiased, which gives them additional restrictions when talking to sources… Two women have lost credibility. And two women have made it that much harder for other girls like me to be taken seriously in the journalistic workplace.”

She expressed amazement that Parker, after seeing how badly the situation ended for Salinas, went ahead and took the same unethical path. She said, “There is a clear code of ethics for both politicians and reporters. Villaraigosa, a man still married during the first affair, obviously had no trouble breaking his when he dated Salinas in the first place. This year, Parker faced the same choice to forgo acceptability. The news isn’t in the mayor’s hankering for hot news reporters. We all knew that two years ago. The story is instead fresh because Parker, having knowledge of Villaraigosa’s previous indiscretion and its unhappy ending, jumped on-board the same ship anyway.”

This kind of misbehavior is a 2-fer in more ways than one. It sadly and negatively raises justifiable public distrust of both government and the press.