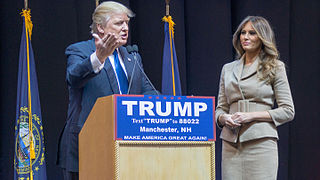 Donald Trump’s wife Melania Trump has officially filed lawsuits against Daily Mail, a newspaper in the UK, and a Maryland blogger Webster G. Tarpley for claims about her being an escort in the 1990s.

Her lawyer, Charles Harder, confirmed that Trump “filed suit today in the state circuit court for Montgomery County, Maryland” against both the Daily Mail and blogger Webster G. Tarpley.

“These defendants made several statements about Mrs. Trump that are 100% false and tremendously damaging to her personal and professional reputation,” Harder said in a statement. “Defendants broadcast their lies to millions of people throughout the U.S. and the world—without any justification.  Their many lies include, among others, that Mrs. Trump supposedly was an ‘escort’ in the 1990s before she met her husband.”

“Defendants’ actions are so egregious, malicious and harmful to Mrs. Trump that her damages are estimated at $150 million dollars,” he went on.

“Melania Trump’s lawsuit against me is without merit.  Mrs. Trump is a public figure actively engaged in the Trump for president campaign.  We are confident that Mrs. Trump will not be able to meet her high burden of proving the statements published about her on my website were defamatory in any way.  Her lawsuit is a blatant attempt to intimidate not only me but journalists of all stripes into remaining silent with regard to public figures.  This lawsuit is a direct affront to First Amendment principles and free speech in our democratic society.”

iMediaEthics has uploaded the complaint here.

Trump put several news outlets on notice for a lawsuit last month, as iMediaEthics reported at the time.

On Aug. 22, Tarpley published a “formal retraction of factual assertions of innuendos regarding Melania Trump.”

That retraction reads in full:

“The Morning Briefing published on tarpley.net on August 2, 2016 referenced unfounded rumors and innuendo regarding Melania Trump, wife of Republican Presidential candidate Donald J. Trump, and her life prior to her marriage. The August 2, 2016 morning briefing asserted that it was widely known that Melania Trump previously worked as an escort and that Mrs. Trump was in fear of revelations that she used to work as an escort. The briefing also stated that multiple unnamed sources stated that Mrs. Trump was in a state of apoplectic tantrum, was suffering from a full-blown nervous breakdown, that both Melania Trump and Donald J. Trump feared the revelations coming to light, and that Mrs. Trump’s condition was negatively affecting the presidential campaign of Donald J. Trump.

“While the tarpley.net editors, writers and contributors did not generate said rumors, the briefing in question was not diligent in fact-checking or maintaining a healthy distance between innuendo and fact.