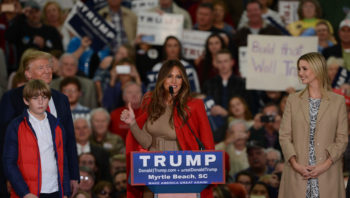 Melania Trump settled her libel lawsuit with Maryland blogger Webster Tarpley after Tarpley blogged last August about rumors that Mrs. Trump had once worked as an escort.

In a statement on behalf of Trump, her lawyers told iMediaEthics by e-mail:

“The First Lady of the United States has settled her lawsuit against Webster Griffin Tarpley of Maryland.  Mr. Tarpley has issued the attached retraction and apology to Mrs. Trump and her family, and agreed to pay her a substantial sum as a settlement.”

Tarpley told iMediaEthics in September that the lawsuit was “without merit” since Melania Trump is a public figure. In late August, he retracted his blogpost, writing that the post “was not diligent in fact-checking or maintaining a healthy distance between innuendo and fact.” The Mail also retracted its story.

Trump is also suing the Daily Mail for reporting similar claims. Her lawsuit against the Mail in Maryland was dismissed over jurisdiction, so she recently refiled the suit in New York.

In the re-filed lawsuit in New York, NBC News reported, Trump’s attorneys said the Mail‘s reporting hurt her brand and that she “had the unique, once-in-a-lifetime opportunity, as an extremely famous and well-known person, as well as a former professional model, brand spokesperson, and successful businesswoman, to launch a broad-based commercial brand in multiple product categories.” The lawsuit also said the claims “impugned on her fitness to perform her duties as first lady of the United States.”