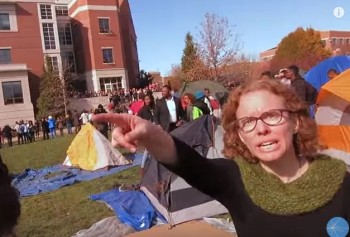 Melissa Click, the assistant professor at the University of Missouri’s communications department who called for “muscle” during a November student protest, now faces a third-degree assault charge over her actions during the protest, the Washington Post‘s Erik Wemple reported. The protests, which focused on diversity on campus, led to the “the resignation of Tim Wolfe, the university system’s president, and a slate of new diversity initiatives.”

Click was videotaped saying “Who wants to help me get this reporter out of here?” and then asking for “muscle” to get the student reporter Mark Schierbecker to stop covering a protest in a public area on campus, as iMediaEthics wrote at the time. Click apologized publicly for “the language and strategies I used.”

Schierbecker “accused Click of grabbing his camera and pushing him while he was making the video,” the Kansas City Star reported.

A spokesperson for the College of Arts and Sciences Dean’s Office, Jordan Yount, told iMediaEthics by e-mail that the Department of Communications chair won’t comment on the personnel matter and pointed iMediaEthics to MU Chancellor Hank Foley’s Jan. 26 news conference.

According to Columbia-based ABC17News, Click plans to plead “not guilty” and is working for the university from home. Foley said there is a task force investigating the incident as well in order to hold her “accountable.” “When we deviate from our processes, we tend to make mistakes. We have our ways of doing things that are not hasty,” Foley is quoted as saying, adding that Click “is frankly aggrieved by this.”

“The punishment for third degree assault is listed as up to 15 days in jail and up to a $500 fine, according to several defense attorney websites,” ABC17News reported.

Wemple commented: “The assault charge marks progress in this case, but the video below shows quite clearly that Click cannot possibly carry out her duties in any environment that purports to value free expression.”