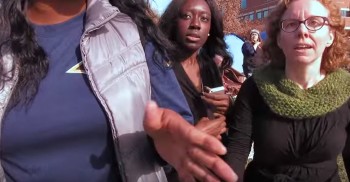 University of Missouri professor Melissa Click has been under fire this week after a video showed her calling for “muscle” to get a student reporter covering a protest out of a public area on campus.

“Who wants to help me get this reporter out of here,” Click said on video before asking for “muscle” to remove the reporter, Mark Schierbecker, and telling him again to “go now.”

The Missourian explained: “A courtesy appointment allows members of one academic unit to serve on graduate committees for students from other academic units. Click teaches mass media in the Communication Department. The School of Journalism is a separate entity.”

According to The Missourian, her resignation came just before the journalism school’s Executive Committee’s vote to revoke her appointment.

Click issued a statement that she shared with the university’s Department of Communication that she wanted to “offer both apology and context for my actions.” “I have a reached out to the journalists involved to offer my sincere apologies and to express regret over my actions,” she wrote. “I regret the language and strategies I used, and sincerely apologize to the MU campus community, and journalists at large, for my behavior, and also for the way my actions have shifted attention away from the students’ campaign for justice.”

Statement by Melissa Click, Assistant Professor of the Department of Communication, Regarding Carnahan Quad Protests pic.twitter.com/FJPUJUL5b3

Separately, the Department of Communication issued a statement from its chair, Mitchell S. McKinney, saying that it stands by student journalists and the First Amendment, adding that, “according to the University’s Collected Rules and Regulations (HR 114), we will not be able to comment on any personnel matters.”

The School of Journalism’s dean, David Kurpius, issued a statement distancing Click from the journalism school and praising ESPN freelancer and current student at the school Tim Tai who acted “professionally and with poise” when he faced “physical and verbal intimidation.”

Statement by Mitchell S. McKinney, Professor and Chair of the Department of Communication pic.twitter.com/p4yXrRmNjv