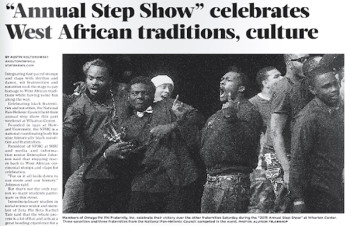 The photo in question.

The State News, the independent newspaper for Michigan State University, apologized for publishing a photo showing a black male giving the middle finger.

Readers protested at the photo choice, the newspaper said. “Readers and community members took to Twitter to announce their distaste and disappointment at the picture’s publishing and the coverage of the event,” the State News reported, adding that “members of the black community on campus” protested by bringing the print edition to the newspaper’s newsroom.

For example, the school’s chapter of Omega Psi Phi vice president Edward Davis told the State News: “We do a lot of positive things, and I feel like that picture did a lot to bring down the image of black males on campus. It contributes to the same negative image that everyone tries to have.”

Omega Psi Phi says on its website that it is “the first international fraternal organization to be founded on the campus of a historically black college,” Washington D.C.’s Howard University.

The photo was used in the March 2 issue, accompanying a story headlined, “‘Annual Step Show’ celebrates West African traditions, culture.” The person giving the finger is a member of Omega Psi Phi at another university, according to a State News report. “Judging by the cutline beneath the pic, the act is one of defiant exuberance,” College Media Matters’ Dan Reimold wrote. “The young man is apparently celebrating his fraternity’s victory in a step show, an annual dance competition among black frats and sororities at MSU.”

Both the paper’s editor-in-chief Celeste Bott and photo editor Erin Hampton apologized for the incident in a statement on the State News‘ website.

Bott wrote in part, “This mistake completely overshadowed a spectacular performance and caused students on this campus to feel hurt and misrepresented, which is the last thing we would ever want to do.”

Hampton called the incident an oversight and said she didn’t “notice the hand gesture” when she was vetting the photo.

“The photo’s publishing was a mistake and I didn’t mean to cause Omega Psi Phi Fraternity, Inc., any harm,” Hampton wrote. “As a black woman and a journalist, I understand how crucial it is to be mindful of how black men are portrayed in the media. A photo like the ones we have published today is a better representation. In the future, I will be much more careful in my editing.”

We would like to apologize for the photo that ran with today’s article, “‘Annual Step Show’ celebrates West African traditions, culture”

We didn’t intend to be disrespectful to those depicted/to our audience with this error in editorial judgement.
— The State News (@thesnews) March 2, 2015

College Media Matters’ Reimold noted that the State News took steps to rectify the error by apologizing in print and on social media, unpublishing the photo, meeting with critics and publishing a column from “the school’s Black Student Alliance president which calls for a year-round push to more fervently “acknowledge and actively listen to the voices of the oppressed.”

iMediaEthics has contacted Omega Psi Phi and the State News for comment.