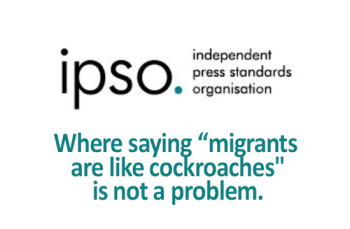 The UK National Union of Journalists slammed new press regulator the Independent Press Standards Organisation (IPSO) for its handling of 400 complaints over a column comparing migrants to bugs.

Sun columnist Katie Hopkins wrote last month that “migrants are like cockroaches.” More than 400 discrimination complaints were filed with IPSO over the column, and more than 300,000 people signed a petition calling for her firing.

But, as iMediaEthics wrote earlier this week, IPSO rejected the 400 complaints, saying that they didn’t specify a single person who was discriminated against.

The NUJ, which says on its website it is “one of the biggest journalists’ unions in the world,” said it “condemned” the decision in a statement on its website earlier this week. “By rejecting the complaint, IPSO has thrown further doubt on its own legitimacy,” the NUJ said.

“Vicious, racist and inflammatory articles impact on all of us,” NUJ’s ethics council chair Chris Frost is quoted in the statement as saying. He called for Hopkins and the Sun to “be held responsible for whipping up xenophobia and hostility.”

“History has repeatedly shown that when sections of the media resort to describing people as ‘cockroaches’ it only serves to inflame prejudicial hatred. Such language must be considered a breach of ethical codes,” Hopkins said.

Hopkins added that the NUJ wants the press regular to handle complaints from people not necessarily affected but filing as “third party” complainants.  “We also continue to argue that complaints that do not name specific individuals but disparage whole groups of people in society, whether they are migrants, asylum seekers, women, disabled or LGBT people, should be a potential breach of the code of practice,” he wrote.

The NUJ told iMediaEthics it hasn’t heard from IPSO in response to its criticism.