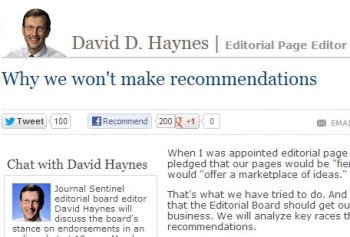 The daily newspaper has a circulation of about 185,000 copies, according to Mondo Times.

Haynes told iMediaEthics by email that the Journal Sentinel decided “to drop endorsements several weeks ago.”  He explained:

“I went to the Association of Opinion Journalists annual convention in Orlando in September, and when I came back had a discussion with my boss, the publisher and the rest of the Editorial Board. That’s when we made the call. That was around Sept. 20.

“The following week I extended invitations to the candidates for U.S. Senate, explaining to them that we would not endorse but that we would publish editorials related to prominent issues in the race. Both eventually agreed to stop in and visit with us anyway. I thought that said a lot about them.”

According to Haynes, the announcement was just made “for two reasons: 1) We’ve been busy and it wasn’t a priority yet; and 2) I thought it made more sense to publish it around the time we would normally be publishing an endorsement editorial (that is, this weekend or next).”

Moving forward, the newspaper “will analyze key races, but we will not make recommendations,” Haynes explained in his announcement report, because it wants to be “fiercely independent.”  Instead of one overall recommendation, the newspaper plans to highlight in its analysis reports “ideas that we think will work.”  Haynes wrote:

“No party or ideology has a monopoly on good ideas – or bad ones. Our job is to sift through this soil and find kernels of reasonableness. Our tools include those editorials but also op-eds, columns, letters to the editor and social media.

“It makes little sense to put our independence at risk during the election season. Though some of our peers across the country will disagree, the Editorial Board has decided that endorsements do put it at risk.”

As a notable exception to this policy, Haynes highlighted the newspaper’s position against recalling Wisconsin governor Scott Walker.

The May 2012 opinion article “We recommend Walker; his removal isn’t justified” argued that “a disagreement over a single policy is simply not enough to justify a vote against the governor.”  (iMediaEthics wrote earlier this year when various Gannett-owned Wisconsin newspapers including the Oshkosh Northwestern and the Wausau Daily Herald revealed that statewide, 25 Gannett journalists had signed a petition for Walker’s recall.)

In terms of journalism ethics individually, Haynes’s announcement noted that “aside from voting, reporters and editors in the news department at this newspaper are not allowed to be involved in politics.”  In an email to iMediaEthics, Haynes added the newspaper does “have a written ethics policy” that is in “pamphlet form.”  (iMediaEthics didn’t see it online anywhere).  Haynes added that “I know that politicking is banned – as it should be.”

Politico noted that in 2008, the Journal Sentinel endorsed Obama.

Haynes told iMediaEthics that readers have given a “mostly positive” reaction to the policy. He wrote:

“We’ve gotten a strong reaction. It’s mostly positive so far, but also a fair number of readers who believe we should recommend candidates. We’ve had a very thoughtful discussion, though, with all kinds of readers – and that’s a very positive thing. I’ve probably received 25 emails so far and at least that many posts on Twitter. I’ve done three radio interviews and will do an online chat on Monday. We will publish letters from readers who disagree with us and we may publish an op-ed from a retired journalist who thinks it’s just about the worst decision we’ve ever made.”