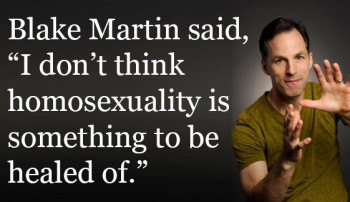 Martin is the course director for the university’s Department of Dance and has a PhD in Kinesiology.

Martin complained over the Star‘s Oct. 5 article, “Toronto Christian program tries to ‘heal’ gays.”  The article, by reporter Graham Slaughter, was the result of his going undercover in Living Waters, a program that “claims to heal gay people through an intensive 22-week program that costs $550.”

In his report, he reported on Martin, who was a guest speaker.

But, the article now carries a correction admitting a misquote, the press council looked into the article and the Star‘s public editor wrote a column about the whole mess and the apology.

Martin told iMediaEthics he was “thankful” for the apology.

“I feel that it undoes some of the damage done (and still being done) by the original article,” he wrote by e-mail. “I do not think however that Mr. Slaughter’s status as ‘intern’ in any way absolves anyone of culpability, in fact it may heighten the degree to which editorial staff may be responsible for not insisting on verification of the story.

What the Toronto Star Article said

Slaughter’s article for the Star disclosed why he went undercover as Graeme Vernon, a “depressed gay man who hoped to become straight.”

Slaughter wrote, “The Star sent me inside the Toronto program because many respected psychological authorities have denounced gay conversion programs, saying they pose serious psychological risks, including depression, anxiety and suicidal thoughts.”

The article originally claimed Martin said, “I’m not sure that a gay person can be healed.”

But, in fact, Martin said, “I don’t think homosexuality is something to be healed of.”

The Star’s article now carries a correction that reads:

“Correction: Oct. 16, 2013: This article was edited from a previous version that misquoted neuroscientist Blake Martin. In fact, Martin did not say ‘I’m not sure that a gay person can be healed.’ What he said was ‘I don’t think homosexuality is something to be healed of.’ The article was also edited to remove reference to Martin as Living Water’s “own scientist” In fact, Martin has no official association with Living Waters.”

Star public editor Kathy English wrote about the misquote and Martin’s later complaint to the Ontario Press Council. English apologized on behalf of the Star in a March 21 column.

According to English, it took the Star “nearly a week” to correct the article. She said that upon receiving the complaint, Slaughter told her and Star investigations editor Kevin Donovan that his account was accurate and Martin was incorrect. “Still, as is our practice, we asked him to recheck his notes to confirm,” English wrote, but noted that Slaughter’s discovery that he was actually wrong didn’t get addressed until almost a week later because she was out of the office.

The misquote of Martin also beget another issue for the newspaper, English reported.

Adding to that, the ruling didn’t identify the reporter who was responsible for the story — Slaughter — so readers thought the Star was covering its tracks.

Because of the reader concerns, the Star put a clarification on the online ruling explaining it was the council’s ruling. And, English noted that she brought up with the press council the topic of naming reporters in rulings and the council’s chair Frances Lankin said it “will review its policy and practice” about doing so. Lankin also commented that the complaint against the Star was “a system failure”

Press Council: The Star misquoted, and took too long to fix problem

The press council ruling itself responded to a complaint from Martin.

The Council ruled that not only did the article contain the misquote, the Star also took too long to properly respond to his complaints.

The council wrote, “In the Council’s opinion, the delay in identifying and acknowledging the error was not acceptable, compounded the potential damage to Dr. Blake Martin’s reputation and could have been avoided.”

At first the Star‘s reporter Slaughter stood by his reporting. “At the Press Council hearing, the Star acknowledged that the reporter should have been required to check his notes and his interview with Dr. Martin before asserting that the reported statement was accurate,” the council wrote.

The council called the error “significant” and that the Star should have investigated the complaint more thoroughly and quickly.  “The review by the reporter should have been done sooner and before defending the story,” the council wrote.

While the council credited public editor English for having “acted promptly once the mistake was discovered,” the council ruled the Star should have done better in handling the complaint.

The Star also published a negative letter to the editor about Martin before correcting its error.

It added, “more care should be taken before deciding to publish letters to the editor that assume a published story is accurate before an investigation of a complaint is complete.”

The ruling itself now carries a March 18 clarification that reads:

“Clarification – March 18, 2014: This decision and the headline were written by the Ontario Press Council. As a member of the OPC, the Star is required to publish the council’s decision unedited.”

Martin complained in Letter to the Editor

In an Oct. 5 letter to the Star, Martin wrote, “I’m writing to express my extreme disappointment and dismay with this article, in which the reporter misquotes my comments, misconstrues my meaning, and misrepresents my ideas, actions and convictions.”

He went on to explain he has “no official association with Living Waters.”  Martin continued:

“My talk there on addiction and neural plasticity was not an endorsement of all of the group’s values, but rather a presentation of solid, scientific evidence on how the brain’s capacity for change can be used to help a person find a way out of a life-controlling addiction.

“I made exactly one comment outside the bounds of science — and identified it as such — when I spoke of faith, hope and choice. The reporter claims I said that I don’t see homosexuality ‘as an addiction that can be cured’ and am not sure a gay person “can be healed.” What I said in fact is that I don’t think homosexuality is something “to be healed of.”

Martin told iMediaEthics by e-mail that he thought the council’s ruling is “appropriate.”

“The questions asked and the ruling given serve to protect people in the future, and I believe this is part of the role of such bodies, and was certainly a large part of my motivation in pursuit of a remedy in this context,” he wrote.

He called for more “individual responsibility” though.

“I do believe however, that in addition to a corporate responsibility, the author (Graham Slaughter) and the Investigative Editor (Kevin Donovan) hold individual responsibility for their role in the story, and should have been held directly accountable in the ruling,” he wrote. “For me it is not a matter of tit-for-tat, where I was named and wish the same on them. Quite simply, they wrote the words, and should be named (Kathy English notes this in her apology).”

He continued, writing to iMediaEthics that he thought there were more issues with the Star’s story than just the misquote.

“My additional comment here is that the scope of the hearing might have been expanded to include a larger portion of the story,” he wrote. “In my original complaint and still, I believe that the story was peppered with inaccuracy and deliberately constructed in order to discredit me.”

For example, he pointed out that his talk at Living Waters was on “addictions in general” not “sexual addictions,” specifically.  He wrote:

“The story makes it appear that my comments were not grounded in scientific research and that I conflate homosexuality with a form of addiction. Further, the story incorrectly claims I spoke to the group on sexual addictions.  That is simply not correct. I spoke to them about addictions in general, almost exclusively about substance abuse and gambling, with very brief references to other forms of addiction.”

iMediaEthics has written to Slaughter to ask if he disputes Martin’s statement that Martin’s speech was mischaracterized.

Martin added, “In my view, the parts of the story as they pertain to me, are still very damaging and inaccurate, despite the ruling. My comments have been de-contextualized to make it appear that I support certain ideas that I simply do not support.”

Martin went on to compliment English and her role in resolving his complaints.

“Overall, I have been impressed with the character and care of Kathy English, and appreciate her being so forthcoming. I feel that the apology was co-opted a bit to make other comments about the Press Council Ruling and the situation, but I understand the nature of writing, and I probably would have done the same thing had I been the editor.”

iMediaEthics has written to Living Waters for comment on the Star report and the Press Council ruling.