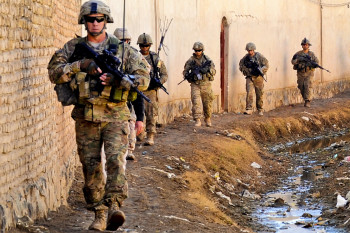 Last month, President Obama announced he was halting the withdrawal of U.S. troops from Afghanistan. Since then, FOX network, ABC/Washington Post, and the Associated Press have separately undertaken polls that purport to measure the public’s reaction to the decision, and to U.S. policy in the region more generally. They don’t all agree.

Each poll mentioned that it was Obama’s decision to delay withdrawal of troops from Afghanistan.

FOX poll wording: “President Obama recently reversed himself by delaying withdrawal of U.S. forces from Afghanistan until after 2016. Do you approve or disapprove of this new plan?

ABC/WP poll wording: “As you may know, Obama has halted the withdrawal of US troops from Afghanistan, saying the current force of 9,800 will remain in place through most of next year, and 5,500 will stay into 2017. Is this something you support or oppose?”

AP/GfK poll wording: “As you may know, President Obama recently announced that the United States will delay withdrawing the remaining U.S. troops in Afghanistan, keeping about 9,800 troops in that country in 2016, and about 5,500 in 2017. Do you favor, oppose, or neither favor nor oppose this plan?”

The results are shown in the graph below: 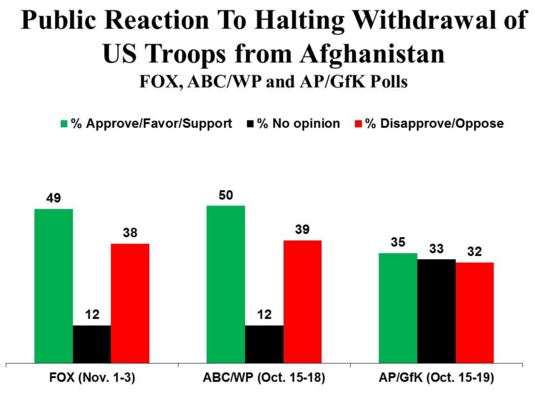 The major difference in wording is that both FOX and ABC/WP used a forced-choice format (providing the respondent with no explicit option of saying “no opinion”), while the AP/GfK poll offered respondents the opportunity not only to indicate if they favored or opposed the plan, but also if they neither favored nor opposed the plan.

When given an explicit opportunity to indicate no opinion, a third of the AP/GfK respondents did so, compared with just 12% each of FOX’s and ABC/WP’s respondents who volunteered that view. The net consequence is that the AP/GfK poll reports “uncertainty” among Americans about the plan to keep troops in Afghanistan, while both FOX and ABC/WP report a double-digit margin of approval.

Unlike the other two polls, the AP/GfK poll also measured how intensely Americans felt about the issue – whether they felt “strongly” or “somewhat” in favor or opposed. The results show that only a quarter of Americans (23%) feel strongly about the issue – 9% in favor of halting the withdrawal, 14% opposed. In addition to the 33% who said they neither favored nor opposed the plan, 26% said they favored it only “somewhat”, while 18% said they opposed it only “somewhat.” 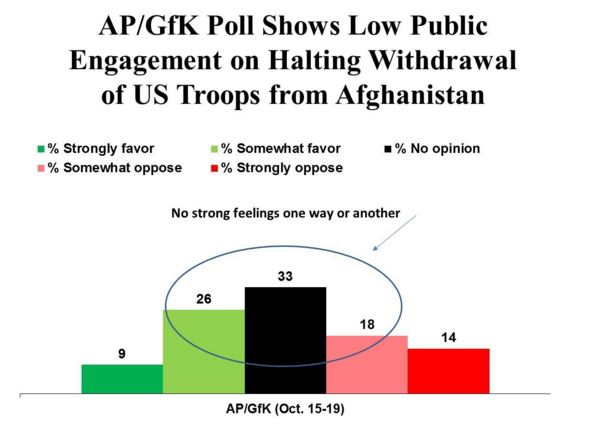 Research suggests that people who say they feel only “somewhat” strongly about an issue typically also admit that they would not be upset if the opposite happened to what they’ve just expressed.* In this case, that means a total of 77% of Americans who wouldn’t mind whether Obama continued the withdrawal or stopped it – 33% with no opinion at all, and 44% who expressed an opinion but admitted they didn’t feel strongly about it.

It’s not surprising that most Americans don’t have fixed views about troop withdrawal from Afghanistan. People have lives to live and even the most devoted news junkie would have a hard time keeping up with all of the issues facing the country at home and abroad.

But that isn’t the picture media pollsters like to present. Instead, they give us the impression that the vast majority of Americans are following every news issue closely and have meaningful opinions about them. The use of forced choice questions bolsters that view, with respondents essentially pressured to offer opinions regardless of whether they have given the issue much thought.

Even the Associated Press, despite having a poll showing how unengaged most Americans are, reported the results as though the public is highly informed, with well-formed opinions. None of the three polls actually asked their respondents how much attention they were paying to the issue, but as Pew has frequently shown (here and here, for example), typically only about a quarter of Americans say they follow international news events “very closely.”

The AP/GfK graph showing 23% of Americans with “strong” views is consistent with the Pew findings.

How the Polls Misread the Public

The ABC/WP and FOX polls both suggest the public supports Obama’s decision to halt withdrawal of U.S. troops from Afghanistan by 11-point margins, while the AP/GfK poll – not taking into account how strongly people feel – suggests the public is about evenly divided – a third in favor, a third opposed (and a third with no opinion).

An examination of opinion intensity measured by that same poll, however, presents a much different picture – the vast majority of Americans (about three quarters) simply unengaged, with those who feel strongly about the issue slightly more opposed (14%) than in favor (9%).

It’s the latter description that I believe is the more realistic picture of public opinion on the issue. Treating top-of-mind responses from respondents who are pressured to come up with an opinion does not, in my view, give us a meaningful picture of how engaged and committed the public is to what’s happening in Afghanistan.

If we want a realistic picture of public opinion, pollsters will need to measure, and take into account, both non-opinion and opinion intensity. The notion that close to nine in ten Americans, or even seven in ten, have formulated a meaningful opinion on troops in Afghanistan is simply not credible.