Missouri U J-School ‘Requirement’ for Pricey Apple iPhone or iPod Not ‘Enforced’: 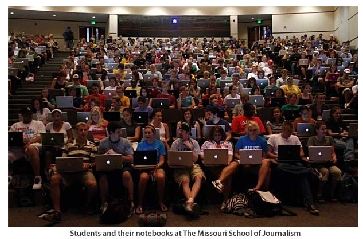 A new requirement for incoming  Missouri University School of Journalism students to have either an iPhone or an iPod touch for their coursework is leaving some students questioning the school’s relationship with technology giant Apple.

Brian Brooks, associate dean of the Journalism School, told the Columbia Missourian that the school hopes the devices will aid students in retaining information from lectures, which he calls “the worst possible learning format.” (He explained that studies show information is better retained if lectures are re-heard multiple times–So how is a cheap tape recorder less effective that a pricey Apple gismo? He does not say.)

Brooks admitted that while the technology is listed as ‘required,’ it is only called required so financial aid money will pay for the expensive devices. The iPod touch retails at around $229 while the iPhone costs $199.

Gawker’s Owen Thomas called the plan a “scam.” He writes: “So basically, this is a scam to let students take out federally subsidized loans to buy iPhones. Presumably they can put AT&T’s minimum $69/mo. subscription on credit, too, and pay it off after graduation. We applaud this. Because if there’s anything journalism needs, it’s students who value gadgetry, theory, and massive student-loan payments over, say, reporting.” Ouch.

Some students have even protested by joining a Facebook group called “Rotten Apple” to protest the new requirement. The group’s mission statement says the school’s decision forces students into “an unnecessary and expensive relationship with Apple” that “compromises journalistic integrity.”

Another Columbia Missourian article said that when the faculty got their chance to vote on Brooks’ proposal after the fact, opinions were mixed.  Janet Saidi, professor and journalist said she simply couldn’t vote yes given the harsh economic times the country is facing.  Associate professor Clyde Bentley protested the school’s decision to mandate a single brand.

While journalists need to remain on the cutting edge of technology as much as members of any other field, Missouri University’s deliberate manipulation of a financial aid loophole is ethically questionable, particularly when less expensive alternatives are already in place.  The J-school, so far, has failed to explain how the Apple gadgets are better than the tried and true, low carbon footprint method of using a tape recorder in class? The school’s decision to require students to have the best of the best does little to prepare them for the reality of working in a field during times when harsh cuts and “making do” are a reality.

Missouri U J-School ‘Requirement’ for Pricey Apple iPhone or iPod Not ‘Enforced’: