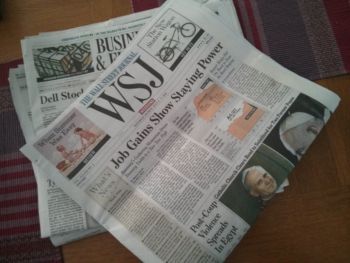 The Wall Street Journal did not apologize to a YouTube user called “PewDiePie.” The Journal‘s site was, however, hacked today, and made to post a “public apology” to PewdiePie. “Due to misrepresentation by our journalists, those of whom have now been fired, we are sponsoring pewdiepie to reach maximum subscribers and beat Tseries to 80 million,” the fake post read. “We also need your credit card number, expiry date, and the lucky 3 digits on the back to win the chicken dinner in fortnite.”

The fake apology was posted on a sponsored content page from the WSJ, Newsweek noted.

“The page was owned by WSJ. Custom Studios, a unit of the advertising arm, which is not affiliated with The Wall Street Journal newsroom,” Dow Jones spokesperson Steve Severinghaus told iMediaEthic  by email. “We have launched a full investigation into the incident. WSJ.com, which is run by the newsroom, was not affected.”

Business Insider posted a screenshot of the apology, explaining that PewDiePie has “the world’s most popular YouTuber account with more than 77 million subscribers, but many have predicted that T-Series would surpass him by the end of the year.”