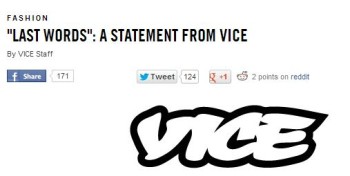 In response to massive criticism and outrage, Vice magazine unpublished and apologized for a photo “fashion spread” titled “Last Words” of people posing as authors before committing suicide. For example, someone posed as Sylvia Plath in front of an oven.

As Media Bistro, Salon and other news sites reported, the pictures were controversial because of the way they showed suicide.

“Is this meant to imply that women are the weaker sex, are frail, are beautiful in their frailness?” Salon questioned.

In place of the pictures, Vice posted a three-paragraph statement saying that the magazine’s intention was “to create artful images.”

“‘Last Words’ was created in this tradition and focused on the demise of a set of writers whose lives we very much wish weren’t cut tragically short, especially at their own hands. We will no longer display ‘Last Words’ on our website and apologize to anyone who was hurt or offended.”

The images are re-published on Jezebel’s website, which called the pictures “almost breathtakingly tasteless” and noted that “Suicide is not a fashion statement.”