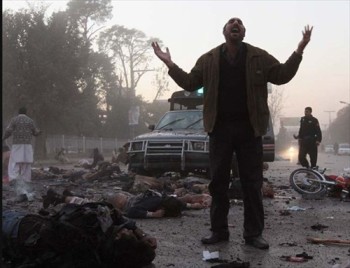 Editor’s Note : FOUR YEARS AGO, MRS. BENAZIR BHUTTO WAS MURDERED. Who was the Brown Jacket Man? Newspapers around the world featured an emotional man in a brown jacket walking among the splattered human remains in the aftermath of the suicide bomb and gun fire that took her life and the lives of twenty-four other people.The photo captions speculated that he was a Bhutto follower, but the journalists present at the assassination scene never asked him his name. The grisly images on the Associated Press website have incorrect time stamps. Why? Our six-part special investigation, to be published during the weeklong anniversary of Mrs. Bhutto’s death, explores these questions and more.

Malik Ayub Sumbal, iMediaEthics reporter :   I am thankful that you came here.  Please let me know how does it feel to be back here 4 years after that terrible day?

Malik with Sardar Muhammad Yaseen Khan at the site of Bhutto’s murder that happened 4 years ago.

Muhammad Yaseen Khan:   First of all, I am really thankful to the iMediaEthics who has given me a chance to speak here at the murder place of Mrs. Bhutto. I am feeling a lot of sorrow and grief while here after four years that today our great leader Benazir Bhutto is not among us.  We have had been associated with the Bhutto family since my father, Sardar Ali Muhammad Okaha, was a party worker in the tenure of Benazir Bhutto’s father, Zulfiqar Ali Bhutto. We were with the Pakistan People Party (PPP) in every hour of happiness and sorrow.

Malik :   What do you remember most from that day?

Yaseen:   Everyone was weeping and it was a horrible day in my life. After the incident I am still shocked and tense. I cannot sleep and rest properly.  I pray that I should also have died in that incident because I cannot bear the loss of Bhutto.  We cannot forget the memories of Mrs. Bhutto, the whole nation is grieved.

Malik:   Immediately after the blast and for significant time afterwards, photographs show you were followed by photographers as you walked around the scene. Did you notice that you were being photographed?

Malik:   Why do you think the photographers picked you to feature in photos around the world? Were you surprised when you were feature on page one of numerous newspapers?

An unnamed man in a brown jacket–who we discovered was Yaseen –appeared in media around the world.

Yaseen:   I have no idea about it as I was not seeing them when they were making the photos.  No I am not surprised about it, as people told me that my pictures have been published in the newspapers and magazines.

Malik:   We notice that you have a photo album of press clipping that you say were sent to you from people in the media? Who sent you the press clippings?

Yaseen:   Yes it has been sent by my relatives who are abroad and some other people and journalists here in Pakistan or when the next day I see it I purchased these newspapers and magazines here locally from Islamabad where all these news were published at that time.

Yaseen:   No, I have not contacted to any media person for the clipping and photos.

Malik:   After all the photos of you were published around the world, did your presence in the photos in any way impact your life?

Yaseen:   No. it has not because I was and I am the party worker and a loyal and devoted for the Bhuttos throughout in my life…No it doesn’t matter about the comments of the people as I am famous for my affiliation with People Party. Now I pray for her a great place in the heaven.