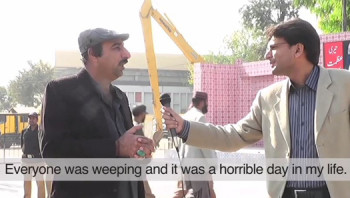 FOUR YEARS AGO, MRS. BENAZIR BHUTTO WAS MURDERED. Who was the Man in the Brown Jacket? Newspapers around the world featured an emotional man in a brown jacket walking among the splattered human remains in the aftermath of the suicide bomb and gun fire that took her life and the lives of twenty-four other people.The photo captions speculated that he was a Bhutto follower, but the journalists present at the assassination scene never asked him his name. The grisly images on the Associated Press website have incorrect time stamps. Why? Our six-part special investigation, to be published during the weeklong anniversary of Mrs. Bhutto’s death, explores these questions and more.Part 1 and Part 2 of this investigation.

How the Guardian decides to call an attack 'terrorism'
New hacking lawsuits against Mirror, Sun publishers