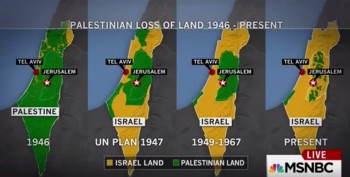 Screenshot of the MSNBC map

MSNBC used a “long-discredited” map of the Middle East that the Jerusalem Post says is “commonly used by Palestinian propaganda groups.”

The map shows four images side by side in 1946, 1947, 1949-1967, and present. The first map identifies most of the territory as Palestine, with the last map identifying most of it Israel.

“The maps closely resemble propaganda disseminated by anti-Israel organizations that support boycotts of the Jewish state and aim to portray it as stealing land once belonging to Palestine, a state that has never formally existed,” the Washington Free Beacon explained. 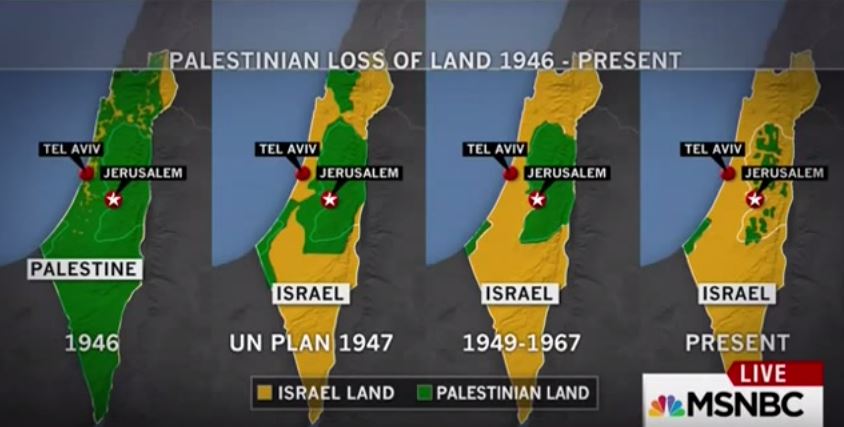 Screenshot of the MSNBC map

Mediaite added: “Several news outlets and sharp viewers took to social media immediately to criticize MSNBC for airing the map, which indicates a narrative of Israel encroaching on land in what any reasonable viewer can (incorrectly) assume to be a country named Palestine with a city named Tel-Aviv. Although Israel first claimed its independence on May 14, 1948, the MSNBC map seems to identify it as a sovereign nation as early as 1947. “

See the segment below.

An MSNBC spokesperson told the Washington Free Beacon this weekend: “In an attempt to shed light on the geographic context of the Israeli-Palestinian issue, we aired a map that was factually wrong.”

Fletcher added to the Free Beacon that the first map was “dead wrong.”

On Oct. 19 on air, Fletcher said of the map, via Newsbusters: “I wish I’d said it right away when I saw them. The bottom line is that the first map showed the area as if it was a Palestinian state….it was completely wrong. I mean, there was no Palestinian – there was no state called Palestine.”

See the apology below.

The Economist pointed out problems with the map in question several years ago.