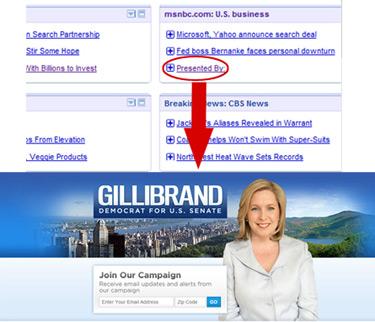 When MSNBC.com business news headlines appear on my iGoogle page, I expect links to MSNBC news content–not to an advertisement for a  U.S. Senate campaign.

But there it was last week. When I clicked on the headline “Presented By” for the “MSNBC.com U.S. Business,” I found, instead of a news story, Senator Hillary Clinton’s controversial replacement, Kirsten Gillibrand, seeking my vote.

I have contacted, MSNBC, Google and the Sen. Gillibrand’s office to find out what exactly went wrong that would transform a purchased ad into a MSNBC news headline? Was something even considered “wrong,” from the viewpoint of MSNBC or Google? If the answer to the latter question is “no,” and this was not a snafu, we are further down the slippery slope of news conflated with undisclosed advertising content.

Surprise! Your iGoogle page has news headlines that lead to ads is NOT what I had in mind while customizing content for my iGoogle page.

Here is the full screen shot of the Gillibrand ad and my iGoogle page where the “Presented By” link to the ad appeared.

UPDATE: It’s 1:58 pm. I just received this email response from Anne Espiritu, Google media representative: “Thanks for your inquiry.   You’ll periodically find ads in 3rd party gadgets —  particularly in the canvas-view mode. In terms of this ad in particular, I encourage you to contact MSNBC which has control over the content displayed on their gadget.”

I am still waiting for MSNBC.com and Sen. Gillibrand’s office to respond.  It should be noted that MSNBC.com was the most popular news web site in July 2005 with 27.4 million users. MSNBC.com continues as number 1 in 2008.

UPDATE: 3:36pm : Just heard from Gina Stikes from MSNBC.com, who writes: ” I’ve reached out to the team here and will provide you with an answer as soon as I have one for you.”

UPDATE: 3:44pm : My iGoogle page suddenly has a new issue oriented ad for Gillibrand that is also deceptively presented to readers as a MSNBC.com news headline story using the same, “Presented By”  link. Here’s the ad.