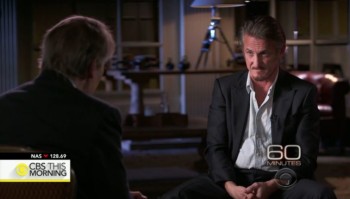 Sean Penn told Charlie Rose of CBS News “my article failed” because he wanted the controversial Rolling Stone piece on drug kingpin El Chapo to “contribute to this discussion about the policy in the War on Drugs.”

Penn also talked to Rose about the Mexican government’s claims that his interview led to El Chapo’s capture.

“There is this myth about the visit that we made, my colleagues and I, with El Chapo, that it was…essential to his capture,” Penn said. “We had met with him many weeks earlier, on Oct. 2, in a place nowhere near where he was captured.”

Penn said he wanted to talk to El Chapo to learn more about the war on drugs, telling Rose, “This is somebody who — upon whose interview could I begin a conversation about the policy of the war on drugs. That was my simple idea.”

Penn said, according to Rose, that “he has not heard from anyone in the cartel or surrounding El Chapo” since the article was published.

As iMediaEthics previously wrote, Rolling Stone stood by its decision to allow El Chapo prior approval of the article before publication, with publisher Jann Wenner calling it “not a meaningful thing.” On the other hand, the Society of Professional Journalists called it “inexcusable.”

“The whole story was at continual risk by the prospect that El Chapo could ​freely reject the article if it did not please him,” iMediaEthics’ editor-in-chief Rhonda Roland Shearer said. “The agreement for approval by a source influenced just as sure as the Sword of Damocles over Penn’s and Rolling Stone owner’s heads.”