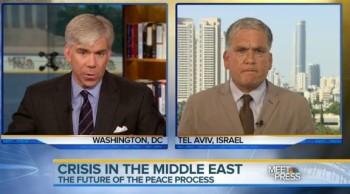 NBC News aired a video released by the Israeli government of rockets fired in the Middle East on its Sunday broadcast of Meet the Press, without checking its accuracy, Mediaite reported.

Meet the Press host David Gregory admitted “NBC News has not independently verified” the video during the program.

He put his guest, a UN’s Relief and Works Agency (UNRWA) spokesperson, Chris Gunness speaking from Tel Aviv, on the spot, asking him about the video, which Gunness couldn’t see.

Undeterred that his guest could not comfortably opine about the un-fact-checked video — it only compounded the error of NBC not approving the legitimacy of the video before broadcasting it in the first place.

Gregory pressed that the video “purports to show rockets fired from a UN school. Is this accurate? Could this be happening without the UN’s knowledge?”

His guest Gunness was quickly fed up and said it was “really unfair” to ask him about the video without showing it to him or having any information about it.

“To be fair to me, to bring me on a live program and expect me to comment live on air on pictures I haven’t actually seen, I think anyone looking at this program would agree that’s really unfair,” Gunness scolded Gregory.

iMediaEthics spoke with Gunness about the interview. Gunness pointed out two major problems with the interview: first, that NBC News asked him to comment on an unverified video he had not seen and could not see; and, second, that NBC News wrongly said that the Israeli government claimed the video showed an attack from a UN school.

Gunness said that he was not informed before the live interview that NBC News planned to show IDF footage live on air and ask him to comment.

“It’s not just unfair, as I said on the air. It’s also unprofessional journalism,” Gunness told iMediaEthics. Gunness knows something about journalism, too, telling iMediaEthics he worked for the BBC for 25 years.

He questioned why NBC News didn’t bring him to the studio and show him the IDF video before broadcast so he could offer an informed opinion.

“If [NBC] wanted to find out the truth, they could have phoned me up beforehand,” he said. He explained he could have looked into the claims quickly and “saved them the embarrassment” of wrongly reporting that the UN school had been attacked.

“It was just a joke, it wasn’t journalism.”

“The key point, the process which I think is very unprofessional, is expecting a UN spokesperson, live on air after an interview with the Israeli prime minister, to comment on a video he can’t see that the audience can see,” he said.

“If NBC journalism is about establishing the facts, that is clearly not the way to go about doing it,” he added.

Regarding Gunness’s second point — that the video was not labeled as a video of a UN school — this is what iMediaEthics has found.

The Israel Defense Forces (IDF) publishd the video on YouTube Sunday. The video is labeled “Hamas Terrorists Fire Rockets from a Gazan School.”

It doesn’t say the video is from a UN school. Just from a school in Gaza.

Likewise, when the IDF shared the video on Facebook, the video wasn’t labeled as a UN school but just “educational institutions.”

iMediaEthics has asked NBC News why Gregory said the Israeli government claimed the video came from a UN school.

Watch the whole interview below.

Later in the Meet the Press broadcast, Gregory returned to talking about the video, adding cautionary language to cover bases like “Israel claims” it “showed rockets being fired by Hamas from  UN school in Gaza.”

“This is shot by the Israeli government, and that’s their claim,” Gregory said, as if it fixed the problem to go back and add distancing language later to cover for the UN’s denial of the video’s legitimacy.

“The UN has reviewed it, tells us they have confirmed in their view the video does not show rockets being fired from UN administrative school in Gaza. So this is a back and forth we are not able to settle at this point,” he said.

Instead of admitting that he might be wrong, Gregory spun the situation into a debate.

Gunness also tweeted about the segment, again calling it “unfair.”

Unfair of NBC 2 make me comment live on air on Israeli intel pix of #Gaza I couldn’t see http://t.co/bGsS5mbV9i I called them out RT