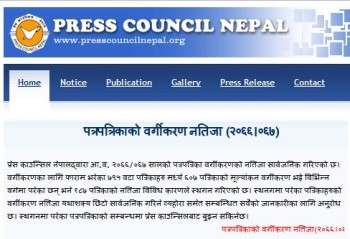 Republica‘s Damakant Jayshi called for “reform in Nepal’s media — print, electronic and online — so as to make them more credible” and for a separation between public broadcasters and political leadership.

Republica is an English-language Kathmandu, Nepal newspaper, according to Mondo Times.   According to Jayshi’s Twitter, he is a “Nepali journalist and Nieman fellow ’07.”  As a suggestion, Jayshi advised that Nepali media needs self-regulation by the media and defamation laws.

According to Jayshi, Nepali media has been successful and aggressive in uncovering issues in society, but issues in Nepali media include the use of anonymous sources, a lack of separation between news and editorial, bias and censorship, among other ethical problems.

Jayshi noted that Nepali media is not “plagued by the ‘paid news'” issues that Indian media faces.

Nepal has a press council and a code of ethics that was revised in 2008, according to its website.

This code of ethics includes many tenets to address Jayshi’s concerns about the Nepali press, including press freedom, editorial independence, “respect for right to privacy,” and quick corrections of errors, among other things.  Nepali journalists are also advised against identifying anonymous sources, discrimination, and publication of graphic images. Journalists are also advised on source-reporter relationship boundaries, proper attribution, labeling news versus advertisement.

According to the Press Council of Nepal’s website, it was established the government ” to promote the standards of a free press in a democratic society and to advise the government on matters relating to the development of healthy and credible journalism in the country.”

We have written to the Press Council of Nepal seeking more information and a response to Republica‘s Jayshi. We will update with any response.