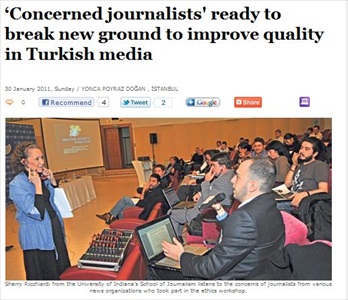 Sherry Ricchiardi, University of Indiana’s School of Journalism, is shown speaking with journalists during an media ethics workshop in Turkey. (Screenshot detail from Today's Zaman's website)

A group of 25 Turkish journalists created a code of ethics during a late January workshop, the International Center for Journalists (ICFJ) reported. The code is to be used in Turkish newsrooms.

The “media ethics workshop” was sponsored by the ICFJ and “Medya Derneði, a Turkish media association.”  According to the ICFJ, both media associations will “maintain contact with participation” to make sure the code is being used.

“Media ethics is the most neglected area in Turkish journalism,” ICFJ’s Turkey director Baris Soyad stated.  “Although the media industry is flourishing rapidly it has a very poor ethical record.”

English-language news site Today’s Zaman reported that Turkish journalist Vildan Ay, “world news editor of the Sky TURK television channel in Istanbul” and participant of the workshop commented about Turkish media ethics that: “We are concerned about where our profession is going.”

Meanwhile, UNESCO announced the end of a two and a half-year project that “promoted media accountability in South East Europe and Turkey” in a January conference.

UNESCO is “the only United Nations Agency with a specific mandate to defend freedom and freedom of expression.”  According to UNESCO, there was “low public trust in the media.”

According to UNESCO, the goals of the project, called “Alignment to International Standards in the Media Sector of South East-European Countries,” included:

The European Commission funded the project, which was launched in August 2008.  iMediaEthics has written to UNESCO asking for more information about its program in Turkey and South East Europe.  We will update with any response.

iMediaEthics recently wrote about Media Disclaimer Center, a new Turkish website that publishes corrections and requests for corrections. We are asking for comments.