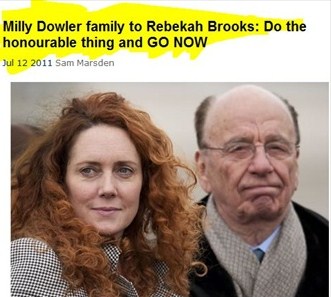 The family of murdered teen Milly Dowler has called for Rebekah Brooks to step down from News Int'l. (Credit: the Daily Record, screenshot)

USA Today noted that “News of the World accounted for less than 1% of News Corp. revenue and earnings.”

News Corporation dropped its “$12 billion bid” for control of BSkyB, Sky News reported.  According to Sky News, “a senior source” told Sky reporter Mark Kleinman that the bid to buy the outlet is “too politicised.”  News Corp still owns 39% of the company, however.  (Read more about the bid being dropped here on Sky News’ site.)

The Associated Press reported yesterday that UK prime minister David Cameron gave his support to “a motion calling for Murdoch to abandon the bid” to buy control in British Sky Broadcasting, known as BSkyB.

The broadcast company describes itself as valuing trust. See its about us page: “Sky is a valued part of everyday life in over 10 million homes…Because we never forget that Sky is a choice, we put customers first and  work hard to earn their trust.”

It also states, in a heading under a section titled, “Responsibility“: “We strive to always do the right thing for our customers and behind the scenes in our operations.” (Emphasis is added).

See our earlier stories on the effect of the News of the World scandal on the BSkyB deal here, here, here and here.

As StinkyJournalism has previously reported, The Guardian’s revelation that News of the World hacked the phone of UK teenager Milly Dowler in 2002 in the days after she was kidnapped. Dowler was later found murdered.  News of the World reportedly deleted voicemails left for Dowler, giving her parents false hope she was alive.

The BBC reported that Mark Lewis, the attorney for Milly Dowler’s family, commented  “It’s time for politicians to stand up to the press.”

“Now it is time for politicians to have to go through the same experience to find out the truth of the position in respect to press intrusion into their lives and how it had been fomented by the relationship between the press and politicians,” he added.

As StinkyJournalism has previously reported, the Dowler family’s attorney has called for Brooks’ resignation and noted that Murdoch hasn’t apologized for the hacking of Dowler’s phone.

According to the BBC, UK Labour Leader Ed Miliband called for “justice” for the Dowler family. Miliband stated:

“What the Dowler family were saying to me is that it’s very, very important that the judge-led inquiry doesn’t just look at a narrow set of issues but looks at the broad range of issues, the relationships between the police and newspapers. They had experiences which suggest that there were contacts going on between the police and newspapers which, frankly, invaded their privacy and were terrible things.”

Meanwhile, the Guardian reported that UK prime minister David Cameron “announced” that any “executive” who gave the OK for “illegal activities” like phone hacking at UK news outlets “will be barred from running any media organisation in the UK.” Cameron added that there will be a “two-pronged inquiry” into the media including “a full investigation into the wrongdoing in the press and police” and “a review of the regulation of the press.” Read more about Cameron’s  calls here.

While Murdoch and Brooks don’t have to attend, according to Journalism.co.uk, “the select committee does have the power to compel witnesses.”

News International issued a statement about the request, Journalism.co.uk reported:   “We have been made aware of the request from the CMS committee to interview senior executives and will cooperate. We await the formal invitation.”

Bloomberg reported that Murdoch “is facing at least six investigations stemming from a phone-hacking scandal” and the now-dropped bid for BSkyB.

Australian Broadcasting Corp.’s Leslie Cannold commented on the scandal and claimed that News International can not “put the scandal behind it” until Brooks is gone.  Cannold noted that Brooks would have a conflict of interest in any investigation and any results wouldn’t be believable.

“To paraphrase one Tweeter on the issue, how can Brooks get to the bottom of the scandal when she was at the top of it?” Cannold added.  She noted that this phone hacking scandal is an example of lack of accountability in media.

“But to really set things right, we’ll need more than Brooks’ head on a pike. The abuse of media power that lies at the heart of the phone hacking scandal can be seen in News Corp media in other parts of the world, including Murdoch’s Australian tabloids and the national broadsheet, The Australian. Indeed, part of the horror generated by the News of the World scandal is its exposure of how unchecked media power can corrupt the foundational institutions – and so the very workings – of democracy.”

Press Gazette reported that News International claims it found out about Brown’s son from a “tip-off” and “legitimate” ways.

UK press regulatory body the Press Complaints Commission reportedly also commented that Brown didn’t contact the organization about the Sun’s report.  “National press insiders believe if Brown had asked for his privacy to be respected in this matter via the PCC no story would have been printed,” according to Press Gazette.

In a separate report, Press Gazette reported that the Sun has stated it didn’t “access the medical records” of Gordon Brown’s son or have anyone else do so.

The Sun claimed that “a member of the public whose family has also experienced cystic fibrosis” brought the newspaper “information voluntarily” about Brown’s son “because he wanted to highlight the cause of those afflicted by the disease.”

The Sun added that that person “has provided a written affidavit” claiming this.

According to The Telegraph, Brown even asked police if News of the World pivate investigator Glenn Mulcaire “targeted” him but the police said no, until this year when the police “reopened their inquiry.”

Meanwhile in an interview with the BBC, Brown claims that the Sunday Times “got access to my building society account, they got access to my legal files, there is some question mark about what happened to other files – documentation, tax and everything else.”

Brown commented that he’s “shocked” about the allegations “because of their links with criminals, known criminals, who were undertaking this activity, hired by investigators with the Sunday Times.”  He questioned how he was “so vulnerable to unscrupulous tactics, to unlawful tactics, methods that have been used in the way we have found” given the level of security he had in his political positions.  “What about the ordinary citizen?” Brown wondered.

“What about the person, like the family of Milly Dowler, who are in the most desperate of circumstances, the most difficult occasions in their lives, in huge grief and then they find that they are totally defenceless in this moment of greatest grief from people who are employing these ruthless tactics with links to known criminals.”

Brown told the BBC that “My tax returns went missing at one point, medical records have been broken into. I don’t know how all this happened but I do know … that in two of these instances there is absolute proof that News International was involved in hiring people to get this information,” according to Reuters.

Reuters noted that Brown and Tony Blair, both Labour Party members, were endorsed by “some Murdoch titles after Labour’s 18 years in opposition, an important element many Labour officials believed in returning the party to power in 1997.”

Reuters reported John Yates, a police assistant commissioner, claims his phone was hacked. Yates investigated the phone hacking charges in 2009 but “concluded there was not enough evidence to merit further inquiries.”

“I am 99 percent certain my phone was hacked during the period of up to 2005-06,” Yates reportedly claimed.

Yates claimed the phone hacking didn’t intimidate him to drop the investigation.