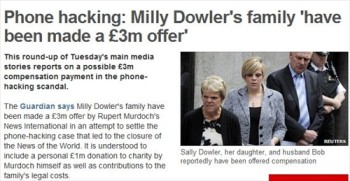 CBS News reported that News Corp. has offered “in the neighborhood of $4.7 million” to the family of Milly Dowler, the murdered teenager whose phone News of the World hacked.  The Guardian reported that News International and the Dowlers haven’t “yet reached final agreement.”

About $1.6 million is to be donated to charity, according to CBS News.

The Washington Post’s Erik Wemple noted that “if the settlement goes through as Reuters is reporting, it’ll be the largest phone-hacking compensation to date.”

Both Reuters and the Guardian sourced the specific payment information to anonymous sources. Reuters noted that a News International spokesperson told Reuters “it is in advanced negotiations with the Dowler family regarding their compensation settlement.”