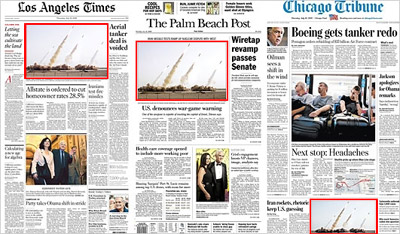 Should the obvious photoshop cloning been caught by AP and others before they published?

“‘It’s a doctored image,’ said Gerard Issert, a technician at Granon, one of the largest photo laboratories in Paris, AFP reported. ‘Although the missiles weren’t all equidistant from the camera, they’re the same size in the picture,’ Issert told AFP in the southern French city of Arles…” related link