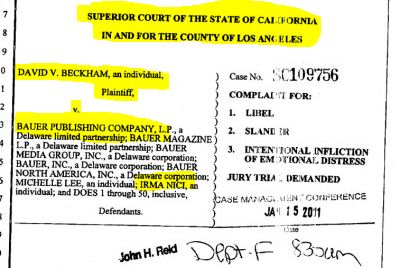 Is this signaling the end of libel tourism? In an interesting twist, The Daily Express reports that Irma Nici, who claimed in a cover article for In Touch that she slept with soccer star David Beckham, is now facing a 16 million pound lawsuit for her false claims. What they don’t mention is this celebrity lawsuit was filed–not in the supposed libel-friendly country of Britain–but in America.

iMediaEthics previously reported when Beckham called for a retraction and apology from the magazine, as well as threatening to sue In Touch.

Beckham’s representative Bert Deixler had sent a letter to In Touch’s U.S. editor warning that Beckham would sue if the magazine printed the false claims, The Express reported.

“Let me make this clear. The story you propose to run about Mr. Beckham and a prostitute is a lie. The allegations are unequivocally denied and if published will lead to a round of international libel litigation which will end in an enormous damages award against In Touch magazine, its ­publisher and the author of the libel. I urge you in the strongest possible terms not to bring these lawsuits upon yourself,” Deixler is reported to have written.

See the lawsuit on the Daily Mail site here. iMediaEthics is writing Beckham’s lawyers to ask why their lawsuit was filed in the U.S., and not the U.K., where libel cases are more traditionally won by plaintiffs.