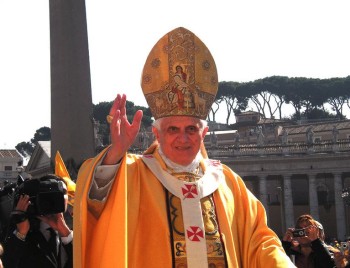 The New York Times didn’t want to publish cartoons depicting Muhammad, but it did publish a picture of Pope Benedict XVI made out of condoms.

The Times argued it wasn’t right to publish the Muhammad images after the attack at French satirical magazine Charlie Hebdo because it was offensive, as iMediaEthics reported back in January.

“Describing the cartoons in question would give readers sufficient information to understand” the reporting, the Times said in January. The Times said that it wasn’t necessary to publish the photos and its editor, Dean Baquet, said that “We don’t run things that are designed to gratuitously offend.” Despite that argument, Times public editor Margaret Sullivan argued at the time that the newspaper did its readers “a disservice” by not publishing the cartoons because they were newsworthy but not “shocking nor gratuitously offensive.”

So, on June 29, when the Times decided to publish a picture of a “portrait of Pope Benedict XVI made of condoms,” some readers were confused. The June 29 story and image of the retired Pope reported that Catholics were not happy about the “Eggs Benedict” image and noted that Milwaukee’s Archbishop, the Most Reverend Jerome E. Listecki, called the display of the image as “callousness” and an insult.

But the Times claimed the two weren’t comparable.  Times standards editor Phil Corbett told the Washington Examiner, Sullivan noted, that the newspaper’s staff “really don’t want to gratuitously offend anyone’s deeply held beliefs,” but admitted “it’s probably impossible to avoid ever offending anyone” and that anyone could “disagree” with the Times‘ decisions.

“I don’t think these situations — the Milwaukee artwork and the various Muhammad caricatures — are really equivalent,” Corbett argued. “For one thing, many people might disagree, but museum officials clearly consider this Johnson piece to be a significant artwork. Also, there’s no indication that the primary intent of the portrait is to offend or blaspheme (the artist and the museum both say that it is not intended to offend people but to raise a social question about the fight against AIDS). And finally, the very different reactions bear this out. Hundreds of thousands of people protested worldwide, for instance, after the Danish cartoons were published some years ago. While some people might genuinely dislike this Milwaukee work, there doesn’t seem to be any comparable level of outrage.”

Mediaite pointed out that the Times has published “glowing reviews to Piss Christ,” an image showing a crucifix of Jesus Christ in a vat of urine, and ran “images of the Virgin Mary made of elephant dung” and more.

iMediaEthics reported back in January when the Associated Press unpublished its photo of the 1987 picture “Piss Christ” following the Charlie Hebdo attacks and the Washington Examiner’s criticism.