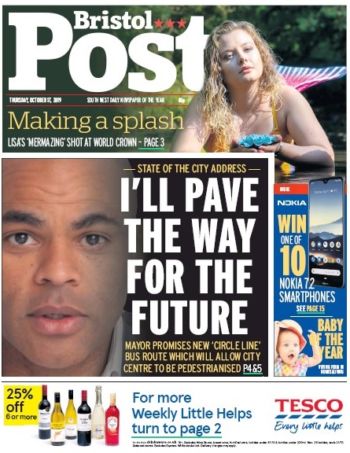 The Bristol Post apologized after readers complained that its front-page illustration made the city’s mayor, who is black, “look like a criminal.”

The front page depicted the mayor, Marvin Rees, in a closely cropped image.

Mike Norton, the editor of the Bristol Post, apologized and said his initial Twitter defense of the photo was “ill-judged.”

“Partly because I didn’t see what its critics saw – which I accept is part of the problem – but also because I felt that some of the criticism was disingenuous, using the page to make wider, personal insults,” he wrote.

iMediaEthics wrote to Rees; in response, an e-mail from the Bristol council declined to comment to iMediaEthics, but noted that it didn’t complain to the UK press regulator the Independent Press Standards Organisation about the Post coverage.

In addition to the apology from Norton, the Bristol Post published a response from Bristol’s Commission for Racial Equality’s Sandra Gordon. Gordon noted that Norton previously apologized last year for an offensive “Faces of Evil” front page showing 16 black men who had been jailed for crack cocaine charges. (iMediaEthics reported on that apology and case at the time.)

Gordon continued to explain why the front-page picture of Rees was problematic: “It was offensive because it was not fitting for our first black mayor, a role model to many, our current city leader who was addressing our city about its most important issues and challenges. It was not appropriate. It didn’t give Bristol Post’s readership the right message about Marvin’s position in the city and about the importance of his role or of this address.”

iMediaEthics has written to the Post‘s Norton.