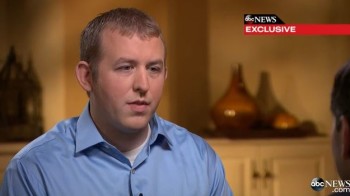 In a report on Wilson’s recent marriage prior to the grand jury’s decision to not indict him, the Times published a photograph of his wedding license and in its story, listed the street where Wilson lives, although not the specific number of his house.

The Times removed the photo of the wedding license but left the name of the street and suburb where Wilson and his new wife, fellow police officer Barbara Spradling, live.

The Examiner reported that the street in question is “relatively small and holds roughly 40 homes, presumably making it easier for those searching for his home to narrow down which one belongs to Wilson.”

The Times has since published an editor’s note on Nov. 25 to inform readers of the decision to pull the photo of the license. It reads:

“An earlier version of this post included a photograph that contained information that should not have been made public. The image has been removed.”

That address is actually for a Missouri law firm though, the Examiner noted, and not the specific address for Wilson.

A separate Mediaite article wrongly reported that the Times published a photo of Wilson’s house. That article now has a correction reading:

Concha’s article for Mediaite also contained a Spiderman-related correction, after misattributing a comment to Spiderman AKA Peter Parker when it was really Parker’s uncle Ben who said the comment. That correction reads: