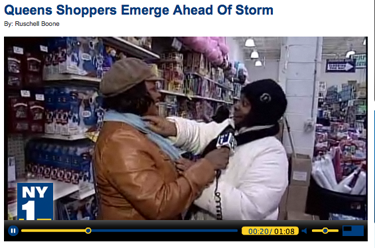 This still from a December 19 NY1 video shows reporter Ruschell Boone discussing a purple scarf that she said she just received as a gift.(Image taken from NY1 video)

In the holiday season, when gift-giving is par for the course, being a reporter can be extra hard. How can a journalist refuse presents when it seems everyone else in the world is getting them? But refuse they must. Journalists, as a rule, are ethically bound to wave off even small favors like a free lunch or a cab ride from a source, and publishers often have strict rules against accepting freebies.

Because of this, it seemed very strange in a recent clip from NY1–New York City’s “24-hour newschannel on the Web”–that reporter Ruschell Boone not only appears to accept the gift of a scarf from an interviewee, but does so freely and on camera.

In an earlier post this year, iMediaEthics reported on Australian journalists calling for “free stuff” from PR representatives looking to get noticed. But now a reporter goes so far as to actually accept a gift while the cameras are rolling?

“Whether they were secretly buying Christmas gifts for themselves… for me… or splurging on family and friends…” Boone voices over her interviews with people in a Queens, N.Y. store.  The “for me” description leads into a clip of an unidentified woman tying a scarf around Boone’s neck, as the reporter questions her about why she is giving this gift. “Boone: I looked cold?  Woman: Yes, you did, and I felt really bad so I said… Boone: I was trying to be cute. It wasn’t working?  Woman: No…  Boone: I should just dress warmer…  Woman: You’ll be sick.”

The clip, time-stamped at 12/19/2009 03:48 PM December 19, is the only one from Boone’s report in Queens that appears easily in an online search. However, at least one other segment featuring the scarf was broadcast originally, and caught the eye of StinkyJournalism founder Rhonda Roland Shearer. In the clip Shearer viewed at 12:07 PM on Saturday December 19, Boone is standing outside a store (presumably the same one she is inside when she accepts the scarf in this clip) and explains how she is wearing “a scarf that was given to me this morning.”  Shearer also viewed footage of the reporter exclaiming “It’s my first Christmas present.” However, these recordings do not appear to be available on the NY1 website.

After calling NY1 about the issue, a spokesperson said “I’m sure we will look into it,” and told StinkyJournalism that “reporters don’t take gifts.”

A scarf is a trifling gift, and it’s arguable that in this context, it didn’t constitute a conflict of interest, as Boone’s reporting was general and a gift was not likely to incur favor on any one source of her story. The woman who gives the scarf is also unidentified, so it’s impossible to know, as of yet, whether she was a shopper or an employee of the store.

At the same time, because avoiding gifts is a well-known practice of professional journalists, to accept one on camera seems like a strange message to send to NY1 viewers. It is likely that the rule against accepting presents from sources was just not in the front of Boone’s mind in this report about shopping and gift-giving. But when more significant ethical breaches often come out of that same lack of attention, even a small scarf could be a harbinger of larger ethical issues.

In many cases, the main reason for journalists to follow the rules precisely is not that it will always keep them from conflict or bias, but that it will protect them from suspicions of conflict or bias. In this case, Boone’s acceptance of the scarf at the very least opens up the question of NY1’s policy on gifts and independent reporting.