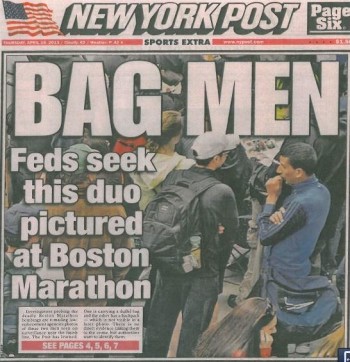 The New York Post responded to the libel lawsuit filed against it by two men labeled “Bag Men” on its front cover.

The two were unidentified at the time, but later came forward to be named as Salaheddin Barhoum and Yassine Zaimi. Neither had a connection to the bombings, and they sued the Post for defamation in June.

The NY Post argued that its “story was appropriate and the headline was nothing more than a play of words,” according to the Washington Post’s Erik Wemple.

Wemple outlined the main defenses the Post offered including that the headline was simply an “attention-getter” and the Post said in the article “There is no direct evidence linking [the two men] to the crime but authorities want to identify them.”

For the latest on the lawsuit, check out Wemple’s blogpost about the court filings.