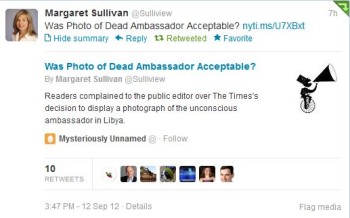 New York Times public editor Margaret Sullivan asked if it was “acceptable” for the Times‘ website to publish a photo of “an unconscious J. Christopher Stevens, the ambassador, who was killed in an attack” this week.   Stevens was “confirmed as ambassador to Libya in May,” according to the Los Angeles Times.

According to Sullivan, the Times’ “caption stopped short of saying it was a photo of Mr. Steven’s dead body,” instead describing him as “reportedly unconscious.”

Sullivan reported that the Times’ Ian Fisher defended the photo because it was newsworthy. Fisher is quoted as saying

“It’s horrifying but there is a journalistic imperative.”

Fisher also is quoted as saying “We don’t hesitate to run pictures of Iraqis, Syrians and Qaddafi dead. We’ve been at war for years. We’ve shown a lot of bodies.”

Sullivan later wrote that the State Department called for the New York Times to take the photo of Stevens down, but the newspaper’s associate managing editor for standards Philip B. Corbett also defended the photo publication as “newsworthy and important to our coverage.”  Corbett added in his “response to the State Department,” that:

“Times editors had long discussions about the decision to include a photo of him after the attack as part of our online report…We did, however, try to avoid presenting the picture in a sensational or insensitive way.”

According to Sullivan, the photo probably wouldn’t be in the Times’ print edition because of timeliness.

We wrote last month when Paul Ercolino, the brother of the victim of the Empire State Building shooting, criticized the New York Times and the New York Post for publishing graphic photos of his dead brother lying in a pool of blood.  In that case again the Times defended the photo’s publication because its newsworthiness.

We’ve written to the New York Times’ Corbett asking if the Times often receives requests from the State Department to unpublish photos and will update with any response.

UPDATE: 9/13/2012 10:48 AM EST: Corbett responded to iMediaEthics’ inquiry, writing:   “I would say rare. I can’t remember a similar request from the State Department any time recently.”

Also, see below the image in question. iMediaEthics obscured the face of Stevens.