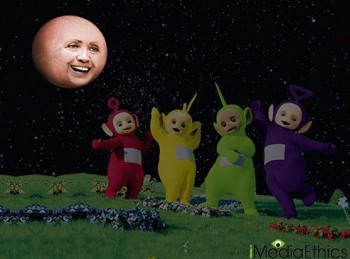 With so many memes going around about the NYTimes Magazine Planet Hillary Cover, iMediaEthics thought we should make our own. (Credit: Photo Illustration, London Shearer Allen)

The New York Times Magazine‘s cover image showing Hillary Clinton’s face on a planet is all over the Internet this week. Outside of criticism for being “quirky,” “bizarre,” or sexist, the image has become an Internet meme.

Huffington Post put it really simply with its headline: “NY Times Magazine’s Hillary Clinton Cover Is FREAKING US OUT”

ABC News has collected a bunch of memes, including using the Clinton planet as Miley Cyrus’ wrecking ball, a Texts from Hillary picture and Goodnight Moon.

The Wire found another great Photoshop where the Clinton planet was merged with Justin Bieber’s mugshot.

iMediaEthics created our own, below:

With so many memes going around about the NYTimes Magazine Planet Hillary Cover, iMediaEthics thought we should make our own. (Credit: Photo Illustration, London Shearer Allen)

New York Times public editor Margaret Sullivan collected a variety of responses to the cover which include that the Times wouldn’t treat a male politician the same way.

However, Times Magazine deputy magazine editor Lauren Kern defended the cover and denied sexism in an interview with Sullivan, arguing that Clinton is “an icon” and the cover “shows her power.” Kern pointed out in 2011, the magazine created an image of Mitt Romney as a Weeble toy. She continued her thoughts about the Clinton cover:

“It’s not our primary responsibility to portray subjects in a flattering way. I am surprised that some people think it’s sexist.”

Likewise, Times executive editor Jill Abramson denied it was a sexist image, saying the idea for Clinton as a planet “is certainly applicable to male as well as female politicians.”

Over on the Times Magazine blog, design director Arem Duplessis explained “How our Hillary Clinton Cover came about.”  The blogpost went into the background of the design idea and included sketches and various versions considered before the Times landed on the planet version published.

In response to the Times blog post, Columbia Journalism Review argued the cover was a “gaffe,” and questioned why the Times post didn’t address the “potential misogynistic overtones of the image.” Further, it asked:

“The lack of response to an onslaught of criticism raises a larger question: Did the Times Magazine editors know that their image was bizarre (and potentially offensive)? And if so, why did they release it? “

Sesame Street said it the best: ‘One of these things is not like the others.’ The latest NY Times Magazine cover is stirring up a lot of controversy. Called everything from sexist to disturbing, it is anything but boring. (Credit: Recent Magazine covers)