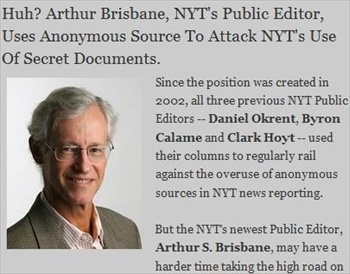 The NYT Picker called out the Times' public editor Arthur Brisbane for using an anonymous source in his column on WikiLeaks. (Credit: NYTPick, [screenshot detail])

The NYT Picker, a blog which “devotes itself exclusively” to analyzing the New York Times, sharply criticized the Times’ public editor Arthur Brisbane‘s most recent column on the newspaper’s relationship with whistleblower site WikiLeaks.

Specifically, the NYT Picker, which is anonymously written, criticized Brisbane for using anonymous sources, for making generalized statements and for “ignoring” the fact that the Times concurrently published its analysis of WikiLeaks documents with a negative profile of WikiLeaks founder Julian Assange.

The anonymous source in Brisbane’s case is “a retired Army general, who asked for anonymity to avoid bringing controversy to the civilian organization he now serves,” quoted as saying “Analysis is not nearly as damaging as reports.”

That quote suggests WikiLeaks is more at fault than the Times for the document publication because the Times only provided analysis, whereas WikiLeaks offered almost 400,000 raw documents.

“I appreciate the importance of what you’re doing, but I’ve also sworn never to second-guess any of my successors, at least not publicly. I hope you’ll understand.”

NYT Picker also criticized the column for being “a wimpy, scattershot analysis of a serious controversy that produced widespread and serious attacks” on the newspaper.

Specifically, the NYT Picker accused Brisbane of generalizing his statement that the newspaper “faced some very tough decisions in this situation and took some risks.” According to the NYT Picker, he didn’t detail what those decisions and risks were.

Also, the NYT Picker slammed Brisbane for not fully addressing that while the Times published its WikiLeaks analysis, the Times also published a profile on WikiLeaks founder Julian Asasnge, viewed negative by some.  Media critic Glenn Greenwald called it  a “smear job”.  (See more of Greenwald’s criticism here.)

While Brisbane didn’t highlight the contrast between the Times’ criticial profile of Assange and the Times’ publication of WikiLeaks analysis, he did mention a few times skepticism toward working with Assange.

iMediaEthics is writing Brisbane to ask if he has any comment to the NYTPicker’s criticism.  We will update with any response.

UPDATE: 11/12/2010 10:46 AM EST:  Joseph Burgess from the New York Times’ public editor office responded to iMediaEthics e-mail inquiry:  “Thanks for writing us.  As a rule of thumb, the public editor does not respond to comments or critiques made by the media.  We believe the public editor’s columns stand on their own merits.”