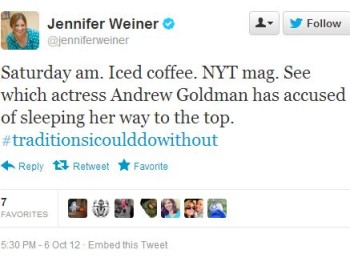 New York Times freelancer Andrew Goldman apologized to author Jennifer Weiner after commenting on Twitter to her that “Little Freud in me thinks you would have liked to at least have had opportunity to sleep way to top,” according to Times public editor Margaret Sullivan.

Weiner had earlier tweeted of Goldman’s Oct. 5 published interview with actress Tippi Hedren: “See which actress Andrew Goldman has accused of sleeping her way to the top.”  In that interview, Goldman asked Hedren “Actors have been known to sleep with less powerful directors for advancement in show business. Did you ever consider it?”

Sullivan also published a Q & A with Times magazine editor Hugo Lindgren about Goldman’s questions.  Lindgren noted that he “approved” the question before it was asked and defended its relevance, saying in part:

“The whole reason for the interview is a new HBO movie about how Hitchcock sexually harassed her. It was an unsavory decision she was actually faced with, so he asked her about it: He made no assertions about what she should or shouldn’t have done. Andrew’s questions acknowledge and refer to sexism in the world, but they are not, in and of themselves, sexist.”

Sullivan also asked about “complaints that Mr. Goldman’s questions are frequently sexist and misogynist.”  In response, Lindgren wrote that “we don’t publish material we believe to be misogynist or sexist” and that the “3 examples” Sullivan sent were “out of probably a thousand published questions that Andrew has asked since he took over the column.” (New York Magazine pointed to three examples outside of the Hedren interview: a Whitney Cummings interview in which he asks “On those Comedy Central roasts, your fellow comedians liked to joke about how you slept your way to fame. How accurate is that criticism?”, a Terri Gross interview, “do you hope to drop dead at the microphone?” and “Did you choose ‘Fresh Air’ over having children” and “I gather that people frequently assume you’re a lesbian.”  and a Melissa Leo interview.)

Lindgren called Goldman’s tweets to Weiner “needlessly rude and insulting” and an “unfortunate outburst.”  For her part, Sullivan called for a “clear social media policy at The Times” and described Goldman’s tweets as “hideous misjudgment.”  Sullivan took it a step further, writing: “Given [Goldman’s] misbehavior on Twitter and his status as a highly replaceable freelancer, I think his editors are extraordinarily generous to give it to him.”

Capital New York noted that Sullivan didn’t contact Goldman before publishing her post, but did email him afterward saying that Lingdren was “the appropriate person” to comment on the situation but asking if he had any response. However, Capital New York reported Goldman said, “I’m going to let my heartfelt apology to Jennifer Weiner speak for itself. For once in my life, I think it’s best to keep my mouth shut.”

iMediaEthics has written to Sullivan asking for more information about setting up any “social media policy” and will update with any response. iMediaEthics was unable to find Goldman’s email address.

Sullivan responded to iMediaEthics that any social media guidelines would be “definitely something that comes under the jurisdiction of Times management” and referred us to Times associate managing editor for standards Phil Corbett.  Sullivan noted that “there are guidelines on social media use, although they are general ones.”

Corbett told iMediaEthics by email he “described our approach to social media guidelines in this interview with Poynter a while back; this still applies.”

In that interview, Corbett explained the Times has “made a conscious decision not to” formalize social media standards.  In part, he explained:

“In general our message is that people should be thoughtful. They need to realize that social media is basically a public activity, it’s not a private activity, and that people will know that they work for the Times, that they are Times journalists, and will identify them with the Times. And so they should just keep that in mind and be careful not to do anything on social media that would undercut their credibility.”

Going undercover to report on people exchanging rent for sex was in public interest, IPSO says