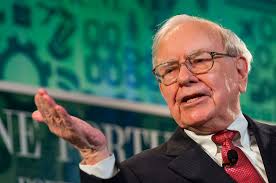 Another score for the role of the public editor in holding the media accountable?

While Nocera initially rebuffed the need to make any statement beyond the Times’ factual correction appended to his column, he has now changed his tune and explained his error in a May 13 column.

The Back Story: Nocera’s Original Column, “Buffett Bites Back”

Nocera’s April 28 column, “Buffett Bites Back,” focused on Buffett’s not voting on Coca-Cola’s equity compensation plan. Buffett’s company Berkshire Hathaway “is one of the largest owners of Coke’s stock” according to Fortune.

Nocera wrote, “I wonder, though, if anyone attending this year’s meeting is going to ask him about his decision to abstain from voting Berkshire Hathaway’s 400 million shares against Coca-Cola’s equity compensation plan, even though Buffett felt the plan was, in his own words, ‘excessive.'”

Nocera’s column pointed to Buffett’s Fortune magazine interview, which Nocera called “remarkable” and “strikingly different in tone from his remarks of last week.”

Of the Fortune interview, Nocera wrote, “having had a few days to lick his wounds, Buffett went on the offensive with Fortune. In abstaining, he told Gandel, he was taking a stand.”

However, the Fortune interview wasn’t days after Buffett’s earlier comments.  Nocera got the timing of the interview wrong and therefore so was the argument of his column, which focused on Buffett’s changing response to not voting,

The Times added a lengthy correction to Nocera’s column. The correction admitted that the column’s headline “Buffett Bites Back” wasn’t correct because of the timing of his statements.

The May 3 correction states:

“This column by Mr. Nocera on Tuesday misstated the timing of an interview with Fortune magazine, in which Mr. Buffett defended his decision to abstain in a shareholder vote on the plan. The interview was on April 23, the same day Mr. Buffett gave interviews to CNBC and other news outlets on the subject — not April 28. It was not the case — as the column’s headline, ‘Buffett Bites Back,’ suggested — that he ‘went on the offensive’ after ‘having had a few days to lick his wounds.'”

In a May 8 public editor post, Sullivan addressed the situation. She noted that Buffett had sought the corrections and added for her own part:

“Mr. Nocera made some serious factual errors in those columns, particularly in the second one, in which he also took Mr. Buffett to task, calling him ‘cowardly and hypocritical.'”

She went on that “there’s a much bigger problem” in that “the entire premise of the second column is built on a mistake.”

In that case, how should the Times properly inform readers of the significance of the errors?

Sullivan said she asked Nocera about the corrections and making a formal statement in his column but he said, “I don’t really see how I would have much to add in another column that goes beyond the correction.”

On the other hand, Buffett told Sullivan the error was avoidable and significant.  And, Sullivan herself called for more than a “standard correction” to help fix the error.

In his May 13 column, Nocera included a “note to readers” admitting that the earlier April 29 column on Buffett “was based on a faulty premise.”  Nocera explained his error and how it occurred. He wrote:

“In the introduction to the interview, the Fortune writer, Stephen Gandel, mentioned the “wave of criticism” that had been unleashed by Buffett’s decision. He specifically mentioned my column.

“That’s why I assumed that the interview had taken place days after my first column was published, and why I chose the headline “Buffett Bites Back” for my next column. But he wasn’t biting back. In fact, Gandel conducted his interview on April 23, the day of the Coca-Cola annual meeting — and before I had even written my previous column. In that same introduction, Gandel also wrote that Buffett had defended himself to Fortune “shortly after the Coke vote.” Inexplicably, I didn’t pick up on that.”

Nocera also pointed to Sullivan’s public editor blogpost about the incident and her calling his column “so intrinsically flawed.”

“Upon reflection, I agree with her,” he wrote. “I sincerely regret the error.”