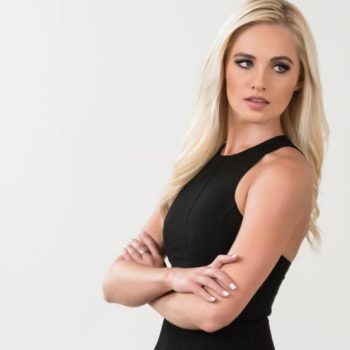 Glenn Beck’s conservative TV network and website The Blaze took Tomi Lahren’s show off the air after she said she was pro-choice. Now she is suing.

The cause of the problem? Lahren, the conservative commentator, commented during a March 17 appearance on ABC’s The View, “I’m pro-choice and here’s why: I can’t sit here and be a hypocrite and say I’m for limited government but I think that the government should decide what women should do with their bodies.”

Lahren’s lawsuit states that after her View comments, she was told by The Blaze’s human resources director not to publicly comment or post on social media, and her work e-mail was closed down. Further, she says she was, for all practical purposes, fired. That is, she was muzzled and kept off the air.

The Blaze’s PR firm Goldin Solutions told iMediaEthics, “It is puzzling that an employee who remains under contract (and is still being paid) has sued us for being fired, especially when we continue to comply fully with the terms of our agreement with her.”

Goldin Solutions said Beck won’t be making a separate statement and pointed to Amy Holmes’ tweets, in which she said Beck “has never made ideology/theology an employment test” and that she told Beck when she was hired that she is pro-choice.

And before me, @glennbeck hired S.E. Cupp, an open atheist. GB has never made ideology/theology an employment test. https://t.co/I6iniGrYtm

When @glennbeck hired me to help launch GBTV, I made it clear, and he accepted, that I am pro-choice. #NoDrama https://t.co/CBeo2FV6EW

Lahren’s lawsuit, reported on by the Dallas News, claims there was a “public smear campaign” against her. Her suit takes a shot at The Blaze founder Beck, stating he has a “mediocre following.”

Lahren alleges that The Blaze knew she was pro-choice, adding “No one told Plaintiff that her statements on The View were either improper or inappropriate” until “a few days later” when she was “suspended indefinitely” by the Blaze’s human resources director, according to the lawsuit.

“Several days later,” human resources “made it clear” to Lahren that she was fired but would continue to be paid under her contract which lasts until Sept. 30, according to the lawsuit.

The lawsuit is published on the Huffington Post’s website.

iMediaEthics has written to her lawyer for more information about her suit.

Her last video posted on The Blaze website is from March 15.