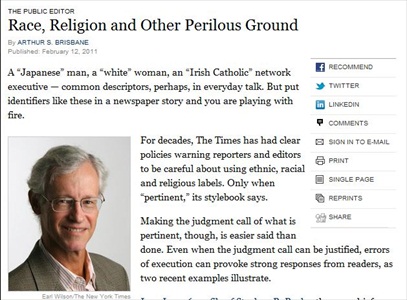 THE COPY DESK DID IT? Arthur Brisbane, the New York Times' public editor, pictured above, discussed problems that resulted in two stories from using the labels Irish Catholic and white woman.(Credit: NYTimes)

Arthur Brisbane, the New York Times’ public editor, took up the issue of describing sources by race and religion in his latest column.

According to “the New York Times Manual of Style and Usage,” ethnicity and race, for example,  “should be mentioned only when it is pertinent and its pertinence is clear to the reader.”

Brisbane highlighted two Times stories in the past month that led to reader complaints: a Jan. 26 profile of NBC Universial Chief executive Stephen B. Burke, and a Feb. 3 report on “abortion in New York City.”

Ultimatley, Brisbane blamed “errors of inattention in editing.” But, editing inconsistencies made it look as if the Times intentionally, but selectively, dropped in racial and religious descriptions. Times’ policies call on reporters to only use “ethnic, racial and religious labels” when “pertinent,” according to Brisbane.

However, “making the judgment call of what is pertinent, though, is easier said than done.”

In both stories he cited, “the original intent” of using labels, Brisbane wrote, was to add descriptive information.

For the Burke profile, Burke was described by the term “Irish Catholic” in addition to other activities such as having “spent time on a kibbutz in Israel” and as “a potential divinity student.” However, the Times cut the story for space and only left in the Irish Catholic reference.

By removing the reference to kibbutz, Brisbane states the Times also removed “the justification for including ‘Irish Catholic.'”

In the abortion story case, the reporter highlighted the stories of “three young women at an abortion clinic in Greenwich Village.”

The story only identified one woman by race — a “white woman” who got pregnant “without fault, because her doctor told her she was ‘infertile’ ” according to Times reader Love Karima Foy.

The other two women “were not identified by race” and “were described in a way that made them seem pretty casual about getting pregnant,” according to Brisbane.

Originally, the story contained the races of all the women but, according to Brisbane, Times deputy metro editor Wendell Jamieson called for the racial references to be removed.

The Washington Post’s Andrew Alexander weighed in on “labeling” sources in an October public editor column. In his column, Alexander commented that he often received reader complaints over labels of former occupation, immigration status, and disabilities, for example.