NYTimes: Photo of Muslim Teenager with Donald Trump on TV in Background wasn’t Staged or Faked 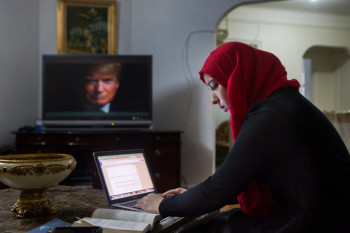 Some readers questioned this photo, but the NYTimes says it was just a case of being "in the right place at the right time." (Credit: NYTimes)

The New York Times says it didn’t fake a photo showing a 15-year-old Muslim teenager doing her homework while Donald Trump was shown on the TV nearby. The photo, one of two pictures of Bronx teenager Hebh Jamal, accompanied a Dec. 14 article, “Young Muslim Americans are feeling the strain of suspicion.”  The caption reads: “Hebh Jamal, 15, studies at her family’s home in the Bronx. With the violent spread of the Islamic State and a surge in Islamophobia, she has had to confront the harsh challenges of being a young Muslim in America.” In the foreground, Jamal is typing on a laptop and reading from a book. In the background, Trump’s face is on the TV.

Readers asked about the photo and whether it was staged or faked, Times public editor Margaret Sullivan blogged Dec. 14.

Times photo editor Michele McNally agreed that the photo “looks too good to be true” but defended the photo as real. The television had been tuned to CNN and the photographer took a number of photos, including the one chosen, when Trump was shown during a commercial.

Sullivan reported that it was simply a case of a photographer “being in the right place at the right time” along with photo selection by editors of the photo that showed Trump.

“Anybody who has been watching CNN knows that that commercial is on all the time,” Ms. McNally said. Editors reviewed a number of possible images, many that did not include Mr. Trump, but chose the one that did because, she said, “it was perfect.”

In addition, the Times photographer, Sam Hodgson tweeted, “I didn’t stage this foto. But it was a chance 4 @Sulliview 2 talk about @nytimes foto ethics.”

I didn't stage this foto. But it was a chance 4 @Sulliview 2 talk about @nytimes foto ethics https://t.co/mCvVZpsEKs pic.twitter.com/XOnrZuHq6N

iMediaEthics has written to Hodsgon for further comment and will update with any response.

NYTimes: Photo of Muslim Teenager with Donald Trump on TV in Background wasn’t Staged or Faked